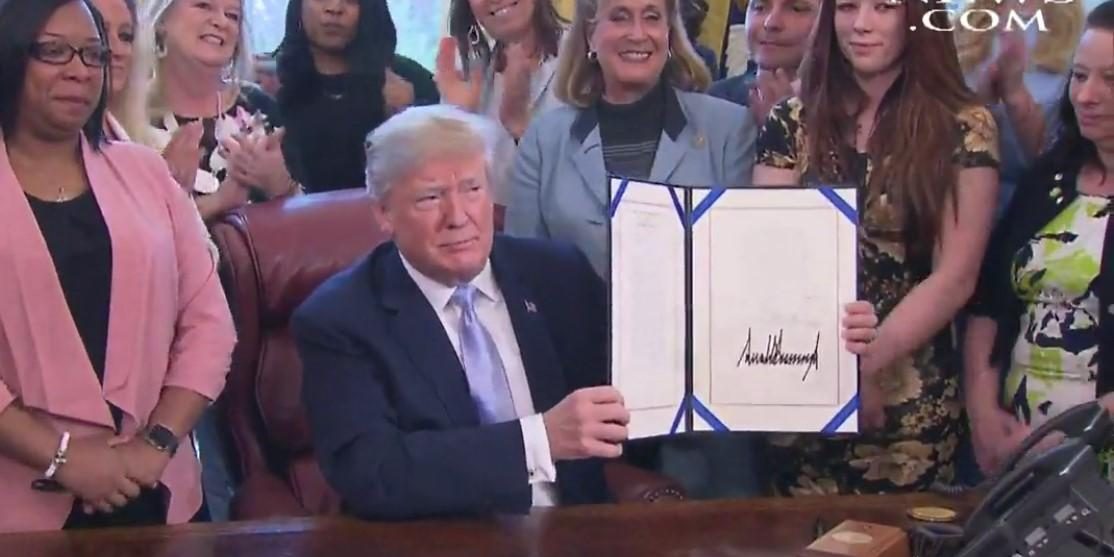 On the heels of the FBI’s shutdown of Backpage.com, which has been a huge facilitator of human trafficking for years, President Donald Trump has struck another blow against the sex traffickers, signing an essential piece of legislation on April 11. From the Washington Post:

Addressing the victims and family members in attendance, the president said, “I’m signing this bill in your honor. … You have endured what no person on Earth should ever have to endure.” Trump added, “This is a great piece of legislation, and it’s really going to make a difference.”

Standing next to Trump as he signed the legislation was Yvonne Ambrose of Chicago, whose 16-year-old daughter, Desiree Robinson, was slain after being prostituted on Backpage in 2016. “It means so much to our family,” Ambrose said of the bill. “Hopefully, there won’t be many more people who have to endure that pain.”

The bill, nicknamed “FOSTA” for its title, “Allow States and Victims to Fight Online Sex Trafficking Act,” goes into effect immediately, but its impact was already being seen around the Internet as sites shut down sex-related areas and stopped accepting sex-related advertising.

The signing comes just days after seven executives for Backpage.com were arrested on a 93-count indictment that alleges the website facilitated prostitution and laundered tens of millions of dollars in profits, and that teenage girls were sold for sex on the site. Some of those girls were killed. The government also shut down Backpage’s classified ad websites around the world, and moved to seize houses and bank accounts around the United States.

Although victims and anti-sex trafficking activists have been celebrating the shutdown of Backpage.com, I was stunned to see that the Women’s March, of all organizations, tweeted out their opposition to the move. “The shutting down of #Backpage is an absolute crisis for sex workers who rely on the site to safely get in touch with clients,” they wrote. “Sex workers rights are women’s rights.” The girls who were pimped, raped, and killed apparently are not important—the third wave feminists do not share the views of those who founded the modern feminist movement, women who recognized prostitution and pornography as fundamental exploitation.

Regardless, this new bill is another victory for opponents of sexual exploitation—and the third wave feminists have again revealed that they will put their ideology over the real bodies of real people every single time.