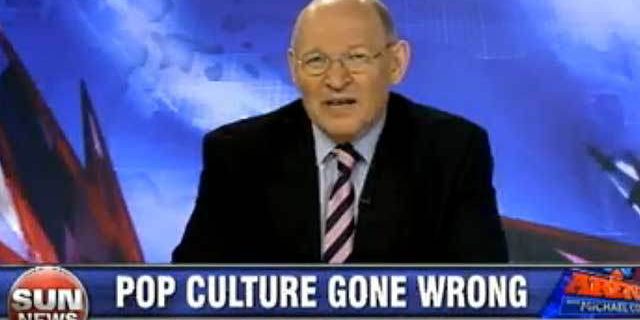 It’s been an interesting year in the world of Canadian journalism, from the ongoing saga of Q’s Jian Ghomeshi to the abrupt firing of Evan Solomon of Power and Politics. But no story has attracted more attention in so-con circles as the reinvention of Michael Coren from condescending conservative to bloviating progressive. Coren’s been doing the Oprah-style apology circuit lately, mourning his treatment by former customers while trying to pander hard enough to gain new ones, to little effect. Some of the interviewers bring up the statements he’s made on social issues before—his entire life, actually. Watching him respond is always quite fun—like watching a cage match between Michael Coren and Michael Coren with the main casualty being his career.

I wrote a piece on this story awhile back. But since then, I’ve come up with a theory: Michael Coren may just be doing a bit. He may be trolling everyone. A Canadian Stephen Colbert, but emulating the most exaggerated and hilariously stereotypical version of a left-wing progressive that he can. Maybe he’s just turning his career—or whatever’s left of it—into a brilliant piece of performance art.

Think about it: Coren has now changed on virtually every issue of importance, but hasn’t actually come up with anything intelligent to say about them. He hasn’t even come up with anything to refute Michael Coren circa 2005. He’s just parroting the same tired, well-worn lines that progressives always use—and ones he’s far too used to debunking to actually believe himself.

On the Trinity Western University Case: “If you want to practice law you have to uphold the law. Equal marriage is the law. Law schools are not churches.”

And in the comments beneath it, when someone asked him if he believed in the rather conservative idea of “sin,” Progressive Michael Coren was ready with a response: “Sin? Of course: judging, condemning, hating.”

See what I mean? His skills of argumentation have been reduced to meme generation. He went from so-con mouthpiece to believing that religious education institutions should not have the right to train professionals, and spitting out the most embarrassing clichés on the questions of right or wrong that anyone who understand logic can only groan at. Judging is wrong? Isn’t Coren’s New Facebook Page devoted to judging “right-wing Christians”? Only a troll would make an argument that meaningless.

These days, the one-time writer has quite definitively turned to producing bumper stickers. On the gay marriage decision in the United States: “A great day for the United States. Now let all of the churches follow. Where there is love there is God!”

Posting an article claiming that same-sex parents were no different than opposite-sex, biological parents and that apparently mothers and fathers are interchangeable and bring nothing unique to the table in a family setting: “Entirely obvious of course, but I guarantee you that the Christian right will now try to discredit this.”

Commenting on Pope Francis’s current crusade against global warming, Coren even managed to refer to long-disproven (by people like Coren) arguments about over-population: “But as so often the Vatican gives conflicting messages and could even be accused of hypocrisy. The Roman Catholic Church forbids all birth control. Is population size not an issue in all of this?”

He even posted an article supporting assisted suicide and called it an “extremely helpful contribution to the euthanasia debate by a bishop who, thank God, avoids ideology.” This after he had gone on 100 Huntley Street to condemn euthanasia barely weeks before (he’s since been fired.) You can’t make this stuff up.

A final piece of proof that Coren is probably just putting one over everyone—or the few bloggers who check out what he has to say because they find it interesting and amusing—he took a bit of a poke at Fox News. This, from someone who ran one of the most strident shows on Sun News Network, aka Fox News North.

Coren is fading from the public scene fast, but I think that if we view Coren’s triangulations from the perspective of intentional parody, everything makes a lot more sense. Changing one’s mind on an issue, or two or three, makes complete sense. Abandoning everything one has ever believed without any good intellectual reason to—that reeks of a Stephen Colbert gig, and Coren’s doing a good job of it, too. I just hope he’s in on the joke.