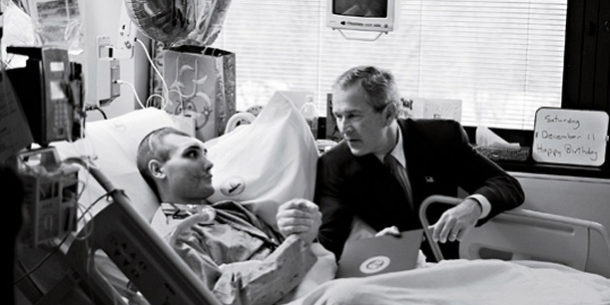 It’s no secret that I’ve always admired George W. Bush—as I wrote in a column earlier last week, he has always been a man of fundamental decency, honesty, and integrity. Interestingly, it is now virtually impossible to make note of Bush’s positive character traits without people accusing you immediately of bashing President Trump, which says more about their opinion of Trump than it does of my own opinion of George W. Bush. I found it ironic that so many people interpreted Bush’s recent speech condemning ethno-nationalism and a host of other cultural poisons as being “anti-Trump” when the former president didn’t even mention Trump’s name: Again, the fact that they assumed a speech devoted largely to condemning white nationalism was directed at Trump says a lot about what they believe to be true about Trump. I didn’t even agree with everything Bush had to say in that speech, I just found it illuminating that so many Trump supporters believed it referred to their man.

But the only reason I’m bringing any of this up is because a column by Dana Perino, which I first read a couple of years ago, cropped up in my Twitter feed again today. It recounts my favorite story about George W. Bush, and with all the vitriol directed him in the past week, I thought injecting it into the conversation might remind people of why some of us still admire him:

One morning in 2005, White House Press Secretary Scott McClellan sent me in his place to visit the wounded warriors. It was my first time for that particular assignment, and I was nervous about how the visits would go. The president was scheduled to see 25 patients at Walter Reed. Many of them had traumatic brain injuries and were in very serious, sometimes critical, condition. Despite getting the best treatment available in the world, we knew that some would not survive.

We started in the intensive care unit. The chief of naval operations (CNO) briefed the president on our way into the hospital about the first patient we’d see. He was a young Marine who had been injured when his Humvee was hit by a roadside bomb. After his rescue, he was flown to the U.S. military’s Landstuhl Regional Medical Center, close to the Ramstein Air Base near Kaiserslautern, Germany. At his bedside were his parents, wife and 5-year-old son.

“What’s his prognosis?” the president asked.

“Well, we don’t know, sir, because he’s not opened his eyes since he arrived, so we haven’t been able to communicate with him. But no matter what, Mr. President, he has a long road ahead of him,” the CNO said.

We had to wear masks because of the risk of infection to the patient. I watched carefully to see how the family would react to President Bush, and I was worried that they might be mad at him and blame him for their loved one’s situation. But I was wrong. The family was so excited the president had come. They gave him big hugs and thanked him over and over. Then they wanted to get a photo. So he gathered them all in front of Eric Draper, the White House photographer. Bush asked, “Is everybody smiling?” But they all had ICU masks on. A light chuckle ran through the room as everyone got the joke.

The Marine was intubated. The president talked quietly with the family at the foot of the patient’s bed. I looked up at the ceiling so that I could hold back tears. After he visited with them for a bit, the president turned to the military aide and said, “OK, let’s do the presentation.” The wounded warrior was being awarded the Purple Heart, given to service members who suffer wounds in combat.

Everyone stood silently while the military aide in a low and steady voice presented the award. At the end of it, the Marine’s little boy tugged on the president’s jacket and asked, “What’s a Purple Heart?”

The president got down on one knee and pulled the little boy closer to him. He said, “It’s an award for your dad, because he is very brave and courageous, and because he loves his country so much. And I hope you know how much he loves you and your mom too.”

As he hugged the boy, there was a commotion from the medical staff as they moved toward the bed.

The Marine had just opened his eyes. I could see him from where I stood.

The CNO held the medical team back and said, “Hold on, guys. I think he wants the president.”

The president jumped up and rushed over to the side of the bed. He cupped the Marine’s face in his hands. They locked eyes, and after a couple of moments the president, without breaking eye contact, said to the military aide, “Read it again.”

So we stood silently as the military aide presented the Marine with the medal for a second time. The president had tears dripping from his eyes onto the Marine’s face. As the presentation ended, the president rested his forehead on the Marine’s for a moment. Now everyone was crying, and for so many reasons: the sacrifice, the pain and suffering, the love of country, the belief in the mission and the witnessing of a relationship between a soldier and his commander in chief that the rest of us could never fully grasp. (In writing this book, I contacted several military aides who helped me track down the name of the Marine. I hoped for news that he had survived. He did not. He died during surgery six days after the president’s visit. He is buried at Arlington National Cemetery and is survived by his wife and their three children.)

And that was just the first patient we saw. For the rest of the visit to the hospital that day, almost every family had the same reaction of joy when they saw the president. But there were exceptions. One mom and dad of a dying soldier from the Caribbean were devastated, the mom beside herself with grief. She yelled at the president, wanting to know why it was her child and not his who lay in that hospital bed. Her husband tried to calm her, and I noticed the president wasn’t in a hurry to leave — he tried offering comfort but then just stood and took it, like he expected and needed to hear the anguish, to try to soak up some of her suffering if he could.

Later, as we rode back on Marine One to the White House, no one spoke.

But as the helicopter took off, the president looked at me and said, “That mama sure was mad at me.” Then he turned to look out the window of the helicopter. “And I don’t blame her a bit.”

One tear slipped out the side of his eye and down his face. He didn’t wipe it away, and we flew back to the White House.

I don’t highlight this story to criticize Donald Trump. I bring up this story as a way of illustrating why myself and so many others are still so fond of George W. Bush, a man criticized by the Trumpites of being a sellout and by the Left of being an unfeeling warmonger. Neither of those are true. Bush was a flawed president, as all are. His legacy will be debated for decades. But for character, I believe he stands a shining example—and one we shouldn’t deride or reject simply because we think it might provide too stark a contrast with the behavior of our current president.