The poster is so bizarre and offensive that when I first spotted it on social media, I was pretty sure it must be fake. It featured a black high-heeled shoe, a stick of red lipstick, and the ominous question: “Would you give up this?” and then beneath the high heel and lipstick, a pink baby soother: “For this?” The answer was presumed, for beneath the pictures was the solution: “You can still get Emergency Contraception up to five days (120 hours) after unprotected sex. And it’s FREE.” There was no mention, of course, that such pills can serve as abortifacients at times and actually kill an already-conceived human being.

The poster was put out by the Walsall Healthcare division of the British National Health Service, and a quick Google search proved that it was, in fact, a real poster that a real person had thought was a genuinely good idea. The male version of this poster was even more pathetic: It didn’t even feature a briefcase or toolbox or some symbol of masculine professional success—it simply asked whether boy-men would like to trade a video-game controller for fatherhood—and again, the creators of this marketing gimmick apparently have such a low opinion on English men that the answer is a foregone conclusion. “Bware da baby trap—use a condom,” it read beneath the sinister soother. (Do people actually talk like that in the UK? I’ve never met a Brit who talks like a drunk rapper.)

It is not just pro-lifers who have found these ads to be offensive for once—women who saw it were stunned at the insinuation that they could not wear lipstick and high heels and also have children. Some also found it rather incredible that the government saw fit to discourage them from having children in the first place. Perhaps the male version of the ad explains things—the National Health Service clearly believes that English men are pathetic and infantile, and thus perhaps more children are unnecessary. For a country presently swirling into a demographic death spiral it is fairly strange that a government institution wants to encourage men to play video games rather than contemplate becoming fathers. 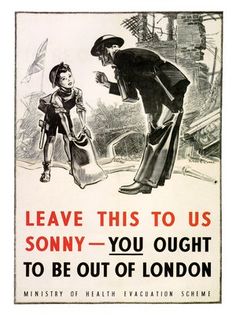 I couldn’t help but think of the sorts of posters governments used to fund—calls to protect and defend the homeland, for example. Times have changed. On a trip to Halifax to speak about abortion last year, I dropped by the little graveyard where many of the victims of the Titanic disaster were buried, and noted that the gravestones were a testament to a different kind of masculinity: “To the Sacred Memory of Everett Edward Elliot Of the Heroic Crew S.S. Titanic,” read one. “Died on Duty April 15, 1912, Aged 24 Years. Each Man Stood At His Post While All The Weaker Ones Went By, And Showed Once More To All The World How Englishmen Should Die.” And another: “Ernest Edward Samuel Freeman…Husband of Laura Mary Jane Freeman. He Remained At His Post of Duty, Seeking To Save Others, Regardless Of His Own Life And Went Down With The Ship. (Erected By Mr. J.  Bruce Ismay.)”

That seems a lot longer than a century ago at this weird point in history, where women are discouraged from “trading” high heels for motherhood and men are warned that procreation is a trick to distract them from their X-boxes. Sacrifice, it seems, is not only spurned by many, it is actively discouraged by the state.

What a sad and stupid time we live in.