Vanessa Otten was fourteen years old when she first realized what abortion really was. The principal of Jordan Christian School in Jordan Station, Ontario, had decided that it was important for his high school to understand the issue in greater depth, and had asked a pro-life activist from the Canadian Centre for Bio-Ethical Reform to give a presentation to the students. During the presentation, a video showing tiny babies killed by abortion was shown. Vanessa stared at the screen in shock. “As I watched the abortionist wrap up the child who was aborted in in her second trimester I almost cried,” she remembered. “In that moment, abortion became so real. On the ride home that night the question what do I do now that I know burned in my head.”

It didn’t take long for her to answer that question. That summer of 2013, CCBR launched a campaign called the “Face the Children” Project, which targeted politicians who had voted against protections for pre-born children by putting postcards exposing their pro-abortion position in the mailboxes of their home ridings. Then-MP Rick Dykstra, who had run as a pro-life candidate but promptly voted against opening the abortion debate once he secured his seat in Parliament, was one of the politicians selected, and groups of young volunteers hit the streets of St. Catharine’s, dropping postcards with photos of aborted babies contrasted with Dykstra’s voting records in every single mailbox. Vanessa joined the volunteers—at that point, she was one of the youngest activists on the street.

She didn’t stop there. With the support of her family—Vanessa is the third of five siblings—she joined a new group set up by Tim Sinke, another student of Jordan Christian who had been inspired to bring the truth about abortion to his community after a CCBR high school presentation. The group called themselves Niagara Against Abortion, and they began to do regular outreach throughout the St. Catharine’s area. Despite occasionally violent backlash, teams of dedicated pro-life activists of all ages braved the weather and profane abortion supporters several times a month—and saw people change their mind on abortion as a result. She had no idea that her local activism would eventually lead to working fulltime in the pro-life movement.

In November of 2015, when she was sixteen, Vanessa did “Choice” Chain for the first time, a project that involves volunteers trained in pro-life apologetics doing educational outreach with images of abortion victims and babies in the womb. “The location was Jackson Square, downtown Hamilton,” she told me. “So many people saw images of abortion that day. I remember watching people as I mustered up the courage to start a conversation about abortion with a few of them. People’s faces displayed shock, horror, anger, and an overall disgust over the image they were looking at. I could see it was stirring people up, making them uncomfortable. I left activism that day encouraged to continue on in the work, knowing that was making a difference.”

In 2017, Vanessa decided to apply for CCBR’s two-month summer internship, a pro-life boot camp that puts young people through intensive training and puts them on the street to do pro-life activism every day. “One day while I was on the streets of Toronto,” she remembered, “a woman approached me and pointed to the abortion victim photo I was holding. She looked upset. To my surprise, she told me to keep doing what I was doing: ‘I wish someone had shown me that picture before I did that to my child.’ She was not the only woman who told me that. Three others told me similar things. One of my best friends was recently in my car and pulled a pro-life pamphlet out of the side door. She opened it, and while staring at the image of a 10-week aborted baby, she told me that she probably would not have aborted her child if she had been shown this image two years before.”

Her experiences on the front lines watching people change their minds about abortion convinced Vanessa to apply for CCBR’s four month internship in 2018. She soon became known by her fellow interns as the girl who constantly drove everyone to do more activism, to have better conversations, to work harder—because pro-life works saves lives. “I love watching as someone’s entire perspective on abortion changes,” she told me. “It all becomes worth it. Leaving a conversation knowing that the person you just spoke to is much less likely to have an abortion in the future makes it all worth it.” One girl stormed up to Vanessa during activism and angrily asked her why she didn’t believe in freedom of choice for women. After Vanessa carefully explained it to her, the girl did an about-face: “Okay, I came here really angry and wanted to just yell the meanest things I could at you, but you are actually really nice and what you are saying totally makes sense! Wow, you really made me rethink this!”

Now nineteen years old and finishing her last semester of social services education with Niagara College, Vanessa has decided to work full-time in the pro-life movement. She once carefully laid out hundreds of postcards with photos of abortion victims on them side-by-side, to try and get real sense of what one day of abortion would look like in Canada: Three hundred children lost. Three hundred children killed. “Abortion is something I am passionate about and I know God gave me the passion and the skills to speak to others about,” she said when I asked her how she decided to make pro-life work her career. “I just can’t know what I know and remain silent. I can’t stop talking about abortion because then other women like my friend will make the same choice, that ends the life of their own child. It is real children’s lives on the line. This stuff isn’t just an interesting debate to me, it’s a fight for the lives of tiny children. I can’t stop. To stay silent is to let it happen.”

Silence, Vanessa says, costs lives. One heartbreaking story that related how: “While I worked in a homeless shelter in Niagara Falls, a client who I knew quite well told me about her abortion, which to my shock had taken place earlier that week. I had known her for a few weeks already. I had no idea she was pregnant, and no idea she was going for an abortion until it was too late. Her child, a child who likely would have had beautiful orange hair and a bubbly personality just like her mother’s was now lying in some medical waste bin like she was trash. I wish I could have talked with this woman and pleaded for her child’s life, but by the time I found out it was too late. Experiences like that make every effort I put into the pro-life movement worth it. Because maybe, just maybe, I can speak to a different mother in time to save her child from death.”

Like so many other young people joining the pro-life movement, Vanessa is talented, well-spoken, and passionate. She could do anything with her life, and launch any career. But instead, she has chosen to speak for those who cannot. She has chosen to face the vitriol of the pro-choice public in order to save the lives of children who need desperately need our defence. And in doing so, she is proving by her actions that those precious little babies really are worth it. 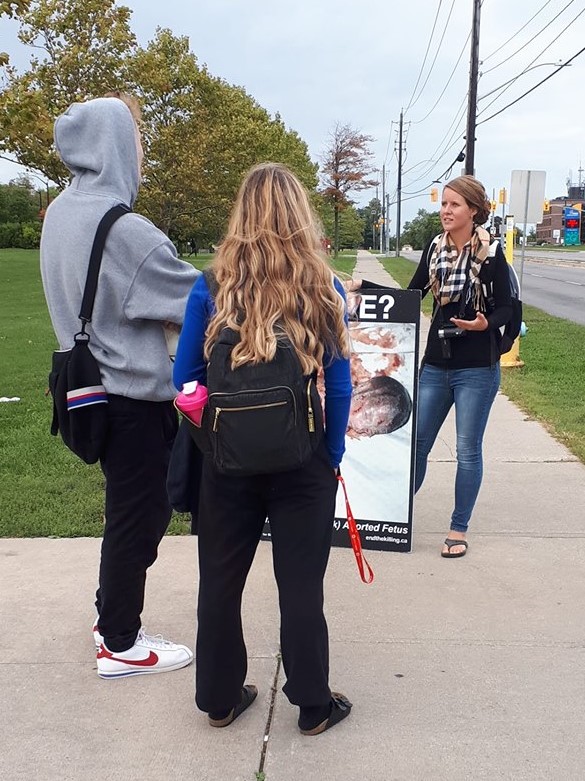