As the culture wars heat up and assaults on religious liberty increase, Christians are increasingly beginning to wonder who their friends are. After some thought, I’ve come up with a helpful litmus test: If a someone identifies as a Christian (and people can identify as anything these days) but spends more time condemning Christians than defending Christianity, we can be fairly certain that this person has joined the other side. By the “other side,” I mean the secular progressive forces seeking to root out the last vestiges of the Judeo-Christian tradition.

One good example of this is columnist and progressive cartoon figure Michael Coren. I’ve written on his humorous and self-imposed game of intellectual Twister before, and it’s been rather interesting to watch him flail angrily at two thousand years of Christian doctrine while trying to insist that it is he, Coren the Chameleon, who is actually correct about what Christ would have believed. At least, he may still be doing this. Lately he’s focused almost exclusively on writing columns about how Stephen Fry endorsed his upcoming book on why he supports gay marriage, including one adorably titled, “Holy crap, Stephen Fry likes my book.” Holy crap, indeed. 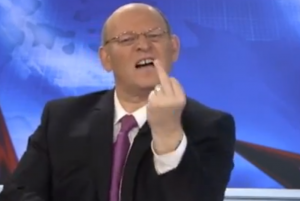 For example, on the legalization of assisted suicide, Michael Coren is currently berating Christians for not being enthusiastic, insinuating that the answer to “anguish” is suicide. This, of course, is precisely the opposite of what he used to believe—or at least the opposite of what he used to get paid to say. It’s hard to tell the difference these days. (That reminds me of a game I liked to play awhile ago: Tweeting old Michael Coren columns at tweets of new Michael Coren columns that say precisely the opposite thing. Usually only politicians are so hilariously duplicitous.)

He also likes to attract attention to his new pro-choice position, asserting obliviously—or perhaps not, who knows—that “Jesus never mentioned abortion.” Perhaps it’s the fact that his son is studying philosophy under renowned abortion defender David Boonin, or perhaps Coren has discovered evidence that abortion doesn’t kill a human being. But I suspect that this is simply part of Coren’s new identity as someone who chirps Christians on everything they believe.

Beyond that, he’s prone to providing further evidence that his brand-new, progressive version of Christianity is more about pipsqueaking at his former political allies than it is about any coherent theology, writing fiery columns announcing that voting Conservative is an unChristian thing to do and announcing that the socialist Bernie Sanders is the most Christian option to vote for.

Coren has joined the camp of Justin Trudeau, Barack Obama and a host of other secular progressives seeking to use the title “Christian” while trying to turn Christianity into something unrecognizable–although Coren is less successful than most, Stephen Fry book blurb notwithstanding. When such men bring up God, Scripture, or the Lord Jesus, you can be almost positive that they are about to bludgeon other Christians and conscript the Divine into their war on thousands of years of Christian belief. Don’t be fooled by “Christians” who spend all of their time attacking the precepts of Christianity and condemning Christians who still hold to timeless truths. At the end of the day, they have no foundation to stand on.