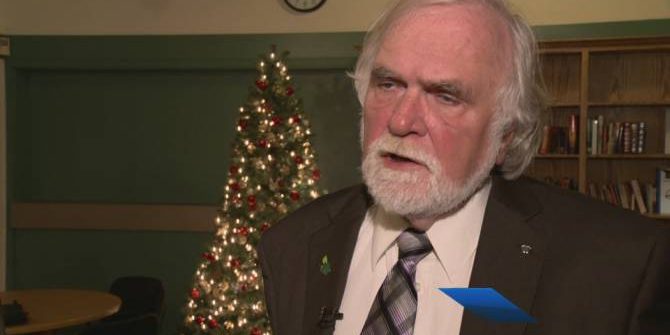 As many of you will remember, back in November I wrote about the uproar surrounding a school trustee in Chilliwack, British Columbia. Barry Neufeld had the misfortune of not only opposing the promotion of transgenderism in schools—which is different than discriminating against kids, which is of course what he’s been accused of by trans activists—but daring to say so out loud, without immediately following his statements up with a groveling apology or tear-filled confessional interview with the media.

A couple of months later, and Neufeld is now facing a complaint at the BC Human Rights Tribunal and calls to resign from a entire list of outraged educators, including the Chilliwack Teachers’ Association, the BC School Trustees’ Association, the Minister of Education Rob Fleming, and Neufeld’s colleagues at the Board of Education. Almost none of these people, it bears mentioning, would have even heard of the gender theories they so furiously defend ten or fifteen years ago. Dogmas are created fast these days. Neufeld responded with his own statement:

I am interested and invested in all students receiving an excellent education regardless of their sexual orientation, gender identity, race, religion or other group identity. I support a safe environment for all students in our public education system, and I support a diverse and pluralistic education system, which includes children who come from homes with traditional family values or faith-based beliefs regarding marriage, sexuality, and gender. I have simply taken issue with one facet of the SOGI 1-2-3 learning resources: the teaching of the theory, as if it was fact, that gender is fluid, that there are more than two genders, and that gender is not based in biology. It is my duty as an elected School Board official to speak up when the best interests of children may be compromised. I will continue to do my duty as Trustee in this regard, while exercising my constitutional freedom of expression as a Canadian.

While LGBT activists are accusing Neufeld of being a dangerous menace, the evidence on this question is actually piling up on his side—not that any of them would countenance facts that conflict with their ideology. I wonder if any of Neufeld’s attackers noticed the conclusions of Dr. James Cantor, for example. From the Toronto Sun:

A Toronto doctor has raised eyebrows and criticism for writing most transgender-identifying children grow out of those feelings. And he says the strongest opposition is from adult transgenders intervening in the lives of children of to further their own agenda. Dr. James Cantor — director of the Toronto Sexuality Centre and author of the blog Sexology Today — compiled results from a dozen medical studies that say the majority of kids stop feeling transgendered past puberty.

One study from Netherlands that Cantor looked at followed 127 transgendered children into adulthood. Of those, 47 said they were still transgendered, 56 said they no longer were and the remaining 24 didn’t participate in the study. Cantor says as a gay man he has heard dissent directed towards him from left- and right-wing groups.

“I looked at the scientific long-term outcomes and compiled them for everyone to see. The claims are thoroughly checkable, but people who have a point to make select studies that were on their side,” Cantor said.

Pride Toronto, which trolled Cantor and posted his findings on line, didn’t respond when asked for comment. Several registered Toronto psychotherapists who work with transgendered people declined or didn’t respond for request for interviews.

“The great majority (of the kids studied) were gay or lesbian and didn’t have a sex drive yet. They had crushes on the same sex and (being transgendered) was the only way to explain it at the time. By the time they hit puberty, they didn’t feel that way,” Cantor said.

Jacq Hixon Vulpe, and education specialist at The 519 Community Centre, which works with and has programs with the transgendered community, says non-binary people need to speak for themselves.

“These (Cantor) opinions create incredibly harmful narratives that will only perpetuate the idea that trans, two-spirit and non-binary people don’t exists and that it isn’t important for parents and society to care for children,” Lacq Hixon Vulpe said.

“If we encourage the idea that gender diversity is just a phase, too many will hold onto this idea and irreparable damage will continue to persist.”

So Dr. James Cantor, himself a gay man, has produced research that should stop those who are advocating for children to be permitted to physically alter themselves through hormone blockers, mastectomies, and castration right in their tracks. It is insane to think that the response of trans activists to the fact that most children outgrow the feeling that they were born in the wrong body is to accuse the researchers of causing “irreparable damage”—when in a real and literal way, the surgeries, treatments and transitions they advocate would do irreparable damage to children and teens who might otherwise grow out of these feelings naturally.

The attacks on Neufeld and a handful of other brave men and women who have chosen to stand up against the LGBT juggernaut are not only wrong, they are actually insidious. Trans activists are viciously claiming that Neufeld and others like him are hurting children, when it is their ideology and their advocacy that is actually doing so.

Neufeld is a courageous man, and he deserves the full support of the millions of Canadians across the nation who share his concern about the insidious influence of trans activists within our schools.