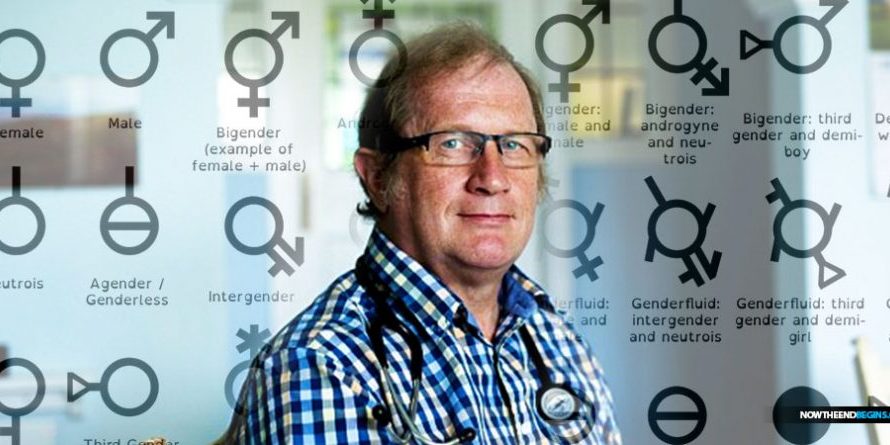 A Reformed Baptist doctor who spent decades working for the National Health Service in the UK has discovered what it means to be on the “wrong” side of today’s gender wars when he was abruptly fired as a medical assessor for a government department after he declined to embrace the ideology of gender fluidity, noting that he believes gender “is defined by biology and genetics,” which confirm the biblical principle that God “made humans male or female.” From the Sunday Telegraph:

Dr David Mackereth has worked for 26 years as an NHS doctor but was told he could not be employed as a Department for Work and Pensions (DWP) disability assessor if he refused to identify patients as being of a sex that they did not see themselves as. The 55-year-old father of four believes sex is genetic and biological, so established at birth. He now claims his right to freedom of speech has been denied and he has been classed “unfit” to work for the department because of his religious convictions. And, the medic from Dudley in the West Midlands fears many other professional people of faith could also be dismissed simply for holding opinions about gender that are “centuries old”.

You’ll notice that even in the terminology used throughout the story, the Telegraph accepts a number of fundamental premises of the trans movement, including the idea that sex is “established at birth,” which is similar to the trans accusations that correctly identifying a baby as male or female amounts to “assigning” gender at birth. In reality, of course, everyone is aware that gender can be determined much earlier than at birth. The media insists on lending credibility to the nonsensical idea that genitalia are simply incidental to whether or not someone is male or female, fundamentally eliminating any meaningful concepts of male and female altogether. More:

Dr Mackereth, who registered as a doctor in 1989 and spent most of his career working in Accident & Emergency wards, said: “I’m not attacking the transgender movement. But, I’m defending my right to freedom of speech, and freedom of belief. I don’t believe I should be compelled to use a specific pronoun. I am not setting out to upset anyone. But, if upsetting someone can lead to doctors being sacked then, as a society we have to examine where we are going.”

Mackareth is correct, of course, and although the Telegraph consistently attempted to portray his rejection of gender fluidity as an explicitly Christian belief, the fact is that there is no medical evidence to support this ideology, and it is rejected by many medical professionals (although they are increasingly growing silent as trans activists begin to wield more power within the medical profession):

Dr Mackereth…started a training course in May to become a health and disability assessor for the DWP. His role would have meant interviewing and then writing independent reports about the health of those claiming disability benefits.

However, when his instructor stated that reports must only refer to the patient – or “client” – by the sex that person identified themselves as, a discussion took place among the medics about the “fluid” nature of gender, Dr Mackereth claims.

“I said that I had a problem with this. I believe that gender is defined by biology and genetics. And that as a Christian the Bible teaches us that God made humans male or female. I could have kept my mouth shut. But, it was the right time to raise it. The tutor took me aside and said he had passed my comments up the chain to the DWP.”

Dr Mackereth then received an email from Advanced Personnel Management (APM), the agency that employed him and would have hired him out to the DWP. They explained he could undergo training about the department’s policy, but the DWP had consulted lawyers and was adamant that any report or contact with clients should refer to them in their chosen sex otherwise it “could be considered to be harassment as defined by the 2010 Equality Act”.

The doctor replied that “in good conscience” he could not conform to those demands, and so the contract was terminated between them.

He certainly won’t be. In the coming years, I suspect we’ll see medical professionals of all types being persecuted and perhaps even seeing their careers terminated, by trans ideologues if they dare to voice their opposition to gender fluidity. Interestingly, trans ideology is already having a real-world impact in the realm of medicine: There are people who show up at the hospital claiming to be a gender other than their biological gender, and as a result, medical misdiagnoses sometimes take place. After all, diagnoses are often very different for a male and a female, and reality doesn’t really care about your delusions.

There will be a cost to this ideologically-enforced social experiment. Both individuals who have bought the lies of gender fluidity as well as doctors who refuse to embrace it will pay a price.

Prison officials swamped by male convicts identifying as female in order to get sent to female prisons
January 22, 2020