Predictably, my column on why conservatives can’t support Faith Goldy several weeks ago caused a minor uproar in some circles, with many people refusing to understand the central points of the column or proving they hadn’t read it by demanding proof for my assertion. With the exception of a largely critical column of Goldy in the Washington Post by my friend J.J. McCullough, the media still seems to be steadfastly ignoring her campaign on what amounts to a “don’t feed the trolls” premise. Thus, a long-form interview with Goldy by Graeme C. Gordon over at Raving Canuck (he often writes for Canadaland, as well) is getting a lot of attention.

One interesting fact the interview revealed was that Goldy has a very chilly relationship with Ezra Levant, which is not surprising considering that against his direct orders, she went to the Unite the Right rally in Charlottesville and tarred The Rebel, which he’d been working so hard to build (not to mention the anti-Semitic joke she made about him on the Daily Stormer podcast.) I’m told by reliable sources that many at The Rebel have a lot of animosity for Goldy because she’s never apologized for the impact her actions had on their livelihood—and indeed, Gordon’s interview proves that Goldy refuses to grapple with the question of why, exactly, her past (and current) associations might render her controversial. As J.J. McCullough put it on Twitter, it really would be nice if she would be a tad more introspective.

For those that want to see proof of the animosity between The Rebel and Goldy—and this will also serve as a response to all those former followers of her show that camped out on my Twitter feed and other social media for a few days after I published my original column—go to 48:31 on this video to hear Ezra Levant explain why he doesn’t support Goldy’s mayoral campaign, refer to it as a “Twitter vanity project,” and note that she doesn’t have the track record someone actually wants in a mayor. Staffers at The Rebel have had the first-hand experience of what I was highlighting in my first column: Due to Goldy’s chosen associations, she now toxifies everything she touches.

I want to make two other points about Gordon’s interview, because he mentions me twice. In the first instance, he mentions my article and asks her to explain why she spends so much time on alt-right and white nationalist podcasts and YouTube shows. This is her response:

Look, I’ve been a journalist and commentator for the past ten years of my life. It’s part of my job to interview and be interviewed. I would go on an Antifa podcast if they’d have me on. I’ve been on Israel’s Channel News Two more times than I can count. I will talk to anyone who will hear me. I will interview anyone who is worthy of a story. And this is the exact commitment to transparency that I will bring into office with me. There is no one who is too deplorable if you will for me to talk to. I’m interested in engaging in debate. I know that we now live in a politically correct society where free speech and critical thinking is banned, but my mouth still works, my brain still works, and I’m very interested in using it with anyone who will tango frankly.

This is a clever dodge, but it is also nonsense. She is attempting to give the impression here that she is being asked on to these shows to talk about things she’s been reporting on, or as a pundit. Go ahead and click through the videos I linked in my original column, and read the direct quotations I provide: Goldy is not going on these shows to provide an alternative viewpoint, as she might be if she were going on an Antifa podcast. She’s going on as an ideological fellow-traveler—at one point, she even explains, in detail, her journey from civic nationalism to ethno-nationalism, and why she believes civic nationalism has failed. My column does not try to establish guilt by association. It actually cites specific quotes, and provides all of the interviews I refer to so that people can hear what she’s been saying for herself.

And then there was this exchange:

Do you still believe there is a white genocide taking place then?

Do you want to know something interesting? I have never used the term white genocide to discuss any sort of trend or single event anywhere–

Okay, maybe Jonathan Van Maren’s reporting wasn’t accurate. He said that you did videos on that. So you just talked about demographics of the white populations then?

Yes, I’ve never used the term white genocide anywhere to prove any point. And this is a propagated myth that has been manufactured in some paper and now it has caught on. I’ve never used those terms together anywhere in the media.

My reporting was accurate, and here are a few screenshots of Goldy using the term “white genocide” to prove my point (screenshots courtesy of Alheli Picazo): 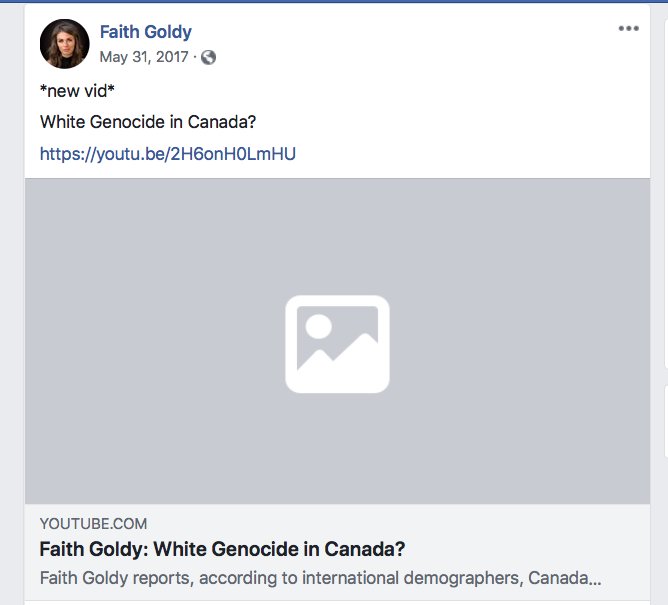 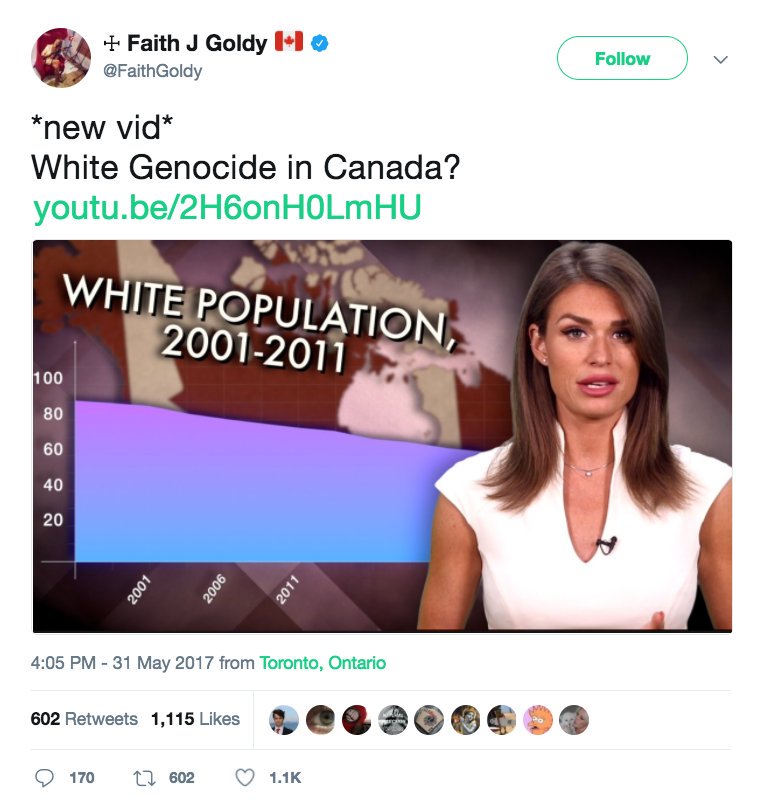 The Rebel appears to have pulled one of the videos and Goldy wiped her Twitter account clean some time ago, but there’s still plenty of evidence out there. Here’s another article where she talks about “white genocide”–and these are her references to a Canadian white genocide, not a reference to what is unfolding in places like South Africa. She also did an hour long show about “ethnocide” in Canada much more recently. Goldy is doing a strange dance at the moment—if you read the answers she gives carefully, she never actually repudiates the alt-right or white nationalism, she simply nitpicks, dodges, and pivots cleverly. She’s minimizing her alt-right record for political purposes, while being careful not to alienate that audience in the overwhelming likelihood that she loses the mayoral race and heads back to Red Ice TV for more conversations on ethno-nationalism as the wave of the future.

In fact, when Gordon asked her about one of the exchanges I cited, where she proves to an alt-right host that she has no Jewish blood by citing her AncestryDNA test, she simply responds by saying that there are Jewish people who support her and that she is a big supporter of Israel (which isn’t inconsistent with alt-right ideology, actually–as Richard Spencer is fond of pointing out.) Again, she doesn’t address the core point: The fact that the host of the show she was on administered a de-facto ethnic purity test to respond to accusations that she is Jewish, which I assume most people will agree is pretty repulsive. She has not yet actually given a straight answer on any of these things yet. She is very prepared for these questions, and very good at answering them without actually addressing any of the concerns that are being presented.