It was snowing lightly as we wound our way through the rolling hills, past snug-looking farms with golden, glowing windows that appeared warm and inviting amid the white gusts. It had been balmy and bright for my presentations and lectures in the Netherlands, and it was sunny springtime in Salzburg, where I had been meeting with the president of ProLife Europe. But in Switzerland, it was still winter, although the shining blue lakes were not frozen and the cars careening through the snowy foothills and whipping past us in a flurry of flakes did not seem to notice.

We pulled into Zug around 10 AM, and my wife dropped me off in front of the offices of Human Life International. I was lost at first, as the plaque outside the door appeared to identify the building I was at as a museum highlighting missionary work in Africa. I peered up and down the cobble-stoned streets, but no sign identifying the office I was looking for was in sight. I thought at first that this must be due to the fact that most pro-life organizations keep their locations secret in order to avoid being targeted by vandals and other violent opponents, but soon a middle-aged woman helpfully materialized to inform me that the office was around the back of the building.

I was meeting a pro-lifer named Christoph to discuss the work of Human Life International as well as to swap strategies (I had brought along a copy of a little book I co-authored with my colleague Blaise Alleyne, A Guide to Discussing Assisted Suicide.) Christopher is a middle-aged fellow with graying hair, and works about 90% of a fulltime job for HLI, he informed me. The other 10% of the single fulltime position at this office is made up by about ten volunteers, three of whom are regularly in the office. At the moment, they were working on sending their latest newsletter out to a distribution list of about 5,000.

Somehow, all pro-life offices look the same, regardless of which country they happen to be in. HLI’s Zug office is no different. The walls were white, there were shelves stacked with decades worth of HLI reports and dozens of binders, and a giant poster from the 2014 Swiss March for Life featuring a baby in the womb and the slogan “One of Us!” in English across the top was pinned to the wall across from the table piled with envelopes and papers. The Swiss pro-life groups cannot formally join the pan-European pro-life organization One Of Us because Switzerland is not a member of the European Union, but they happily hijacked the slogan for their pro-life events. 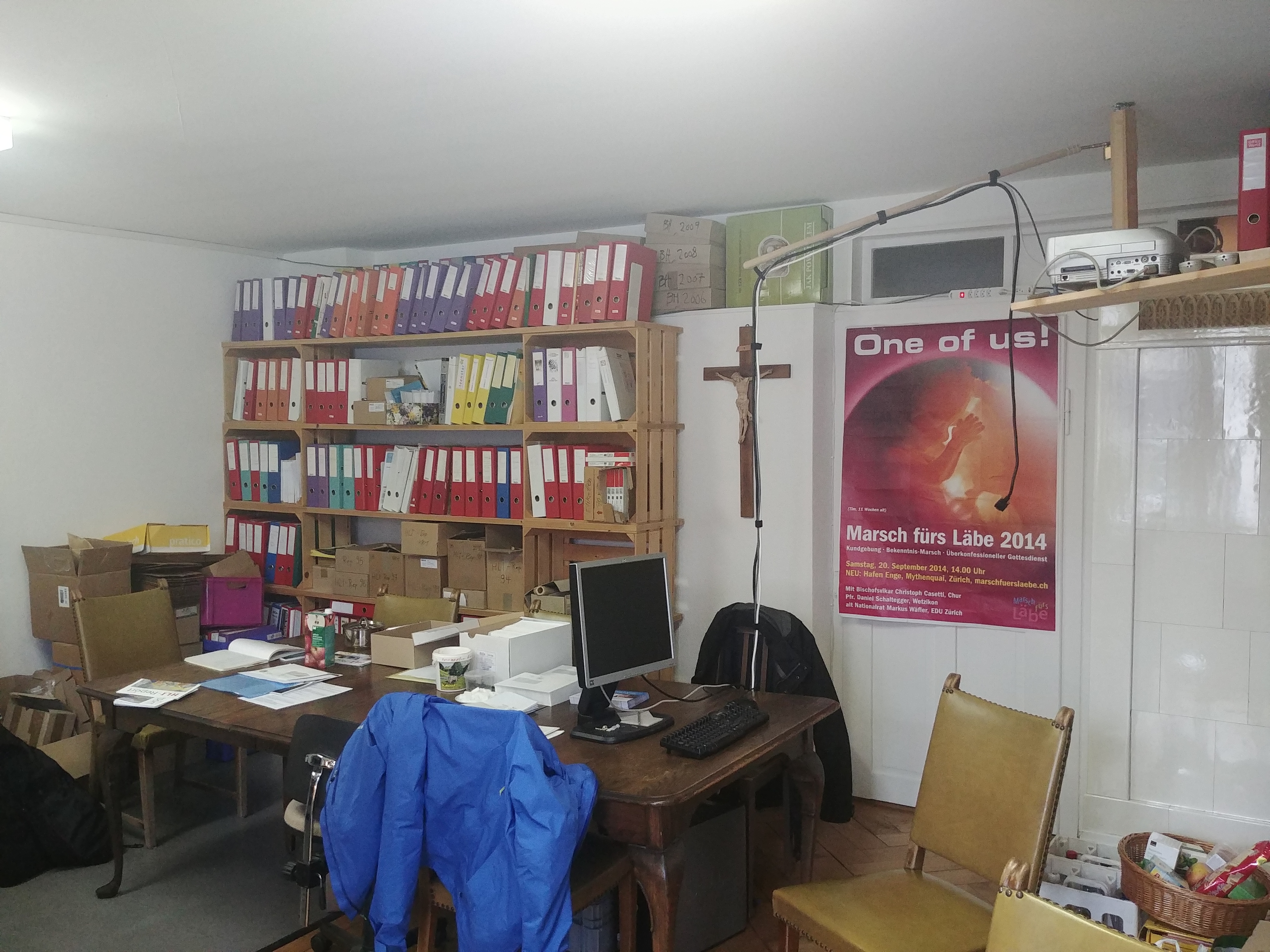 Although Human Life International was founded back in the 1970s, the Swiss arm did not come into being until 1993, founded by the last chief gynecologist of a state hospital in Switzerland who refused to do abortions, sterilizations, and prescribe the morning after pill. Rudolf Ehmann, who looms large in the Swiss pro-life movement, is now very elderly and Christoph noted that he is quite ill at the moment. While HLI is obviously quite Catholic—there is a rather sizeable crucifix on the wall—their strategy, pioneered by their founder, is to present their positions based exclusively on medical evidence.

There are no abortion clinics in Switzerland, Christoph tells me, and so prayer vigils (40 in total) are held near hospitals where they are performed. Every Swiss canton is required by law to nominate hospitals that will be obligated to do abortions, and religious liberty and freedom of conscience is under threat as a result. HLI lobbies the Swiss Parliament on this issue in particular, as well working with organizations such as Association Mama, which is the political arm of the Foundation of Swiss Aid for Mother and Child, the largest network of crisis pregnancy centres in the country. Association Mama’s lobbying has included a popular initiative to stop abortion from being funded in health insurance in 2014 (which voters rejected.)

Another issue HLI works hard on is preventing the expansion of suicide tourism. Beautiful Switzerland, Christoph says sadly, has become famous for suicide, which has been legal for “non-selfish” reasons since 1942. The suicide provider Exit offers services to the Swiss only, and has 130,000 members. Dignitas offers everyone suicide, along with the ironically-named Eternal Spirit, popular with suicide tourists who come to Switzerland to kill themselves. Many Britons and Germans in particular have made use of these so-called services. The problem with fighting assisted suicide in Switzerland, says Christoph, is that the Swiss are so individualistic. Even palliative care organizations won’t oppose it altogether, and are careful to say that there are some cases where assisted suicide might be the compassionate option.

Abortion wasn’t legalized in Switzerland until 2002, although the criminal prohibition on abortion had been ignored for far longer. A popular referendum resulted in 72% voter support for legalizing abortion, with the prevailing view among the Swiss being “personally pro-life” while politically in favor of the woman making the decision. Abortion is now legal on demand throughout the first trimester, with counseling, on the condition that the woman states that she is in distress. The occasional deceit is mandated to ensure that the requisite justification for feticide has been adequately proven. It is legal for the vaguely defined reason of physical or psychological damage up until birth. Like most jurisdictions that use the term “health” without defining it, this essentially means that abortion is legal up until birth in practice. The abortion rate, however, is very low, sitting at about 6.2 abortions per 1,000 women, or 10,000 a year.

Despite this, Christoph believes the Swiss pro-life movement is growing. The tenth annual March for Life will be held in Zurich this year on September 10—the previous two marches were held in Bern, with up to 3,000 people attending each of them. Swiss pro-life groups work together to launch the march, which the authorities are currently attempting to restrict and make it a rally rather than a march. In Switzerland, as in so many another countries, it is an annual march that brings the disparate pro-life organizations with their differing strategies under a single banner of defiance against the Culture of Death for one day of the year.

At these marches, like others across Europe, pro-life people from all walks of like can show up, recognize each other, and realize that they are not alone in a profoundly counter-cultural battle that can often seem very lonely. Despite the fact that the elites have declared these fundamental debates on life and death to be over, millions of people across the continent beg to differ, and spend each day going about the very hard work of shining light into darkness. The eurocrats and politicians may not realize it, but the future of Europe’s generations depends on the unsung work of these ordinary men and women working each day to attempt something extraordinary.