Sex outside the bedrooms of the nation 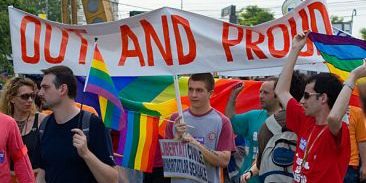 “There’s no place for the state in the bedrooms of the nation,” a tousled, sweaty-looking Pierre Trudeau told a clump of reporters outside the House of Commons in 1967. It was, history now tells us, an iconic moment.

Trudeau’s phrase rapidly became a slogan: “The state has no business in the bedrooms of the nation”—which, in turn, was becoming a secular dogma. Across North America and indeed, the morally ravaged husk of what was once known as “Christendom,” the sexual fascists of the Relativist Revolution demanded that we all recognize that the only Truth was that there was no Truth, the only absolute was moral relativism, and that the churches slam their doors and keep their meddlesome standards of morality to themselves. They were seemingly oblivious to the fact that they were imposing a new morality of their own—one without a foundation, without objectivity, and completely based on feelings. It was philosophical iconoclasm, if not vandalism; as Pierre Trudeau noted wryly in the same interview, he had “knocked down a lot of totems and overridden a lot of taboos.”

Traditionally speaking—from the Victorian era (inaccurately famous for flaunting prudishness) to shortly after the Second World War—Western civilization was generally of the opinion that being civilized meant acting civilized, and that one of the prime indicators of that was the general lack of public disrobing as well as a consensus that love-making should remain an intimate experience behind closed doors. Then the Sexual Revolution arrived, with all that it entailed—the gay liberation movement, the radical feminist movement, and the indiscriminate propagation of “free love.” All of these considered public nudity as a means of making a point, however mysteriously (a feminist baring her chest to protest misogynist men defining her worth by it has always struck me as somewhat counter-productive.) While Trudeau and countless other less eloquent culture warriors courageously spoke up for their right to live life without irritating inhibition and claimed to be removing the State from the bedroom, what they actually did was open the bedroom door and invite it onto the streets.

We’ve gone from one extreme to the other. On the one side of the spectrum, there is mistaken Christian prudishness, the damaging idea that sex is somehow shameful. On the other hand, we have objectively crude and wildly exhibitionist “Gay Pride Parades” and “Slut Walks.” These are not considered to be optional festivals hosted by tiny minority groups. No, politicians who refuse to attend events like the Gay Pride Parade are loudly labelled blatant heretics by the high priests of the New Moral Order, which is of course not an order at all, but a proud lack thereof. They don’t want the State to be outside the bedroom anymore, they want the State in the bedroom—loudly applauding the acts they see taking place, refraining from any judgement but one of approval, and perhaps even paying for pills and bits of rubber to ensure that such acts do not go awry and result in reproduction or infection.

Think of Toronto Mayor Rob Ford, whose repeated lack of attendance at Gay Pride has been a cause of constant outrage to the press and many of his fellow politicians. Before he finally caved and appeared at a Pride event this week, he was asked by one exasperated radio announcer if, “for the love of God,” he would attend a Gay Pride event. (Attempting to define either “God” or “love,” of course, would have certainly complicated the issue.)

Close the church door, open the bedroom door. Morals and values have no place in public, while at the same time the Sexual Revolutionaries demand that we fund their practices with our tax dollars, and that churches accept (if not endorse) their practices without moral condemnation. It would seem that there is such a thing as bad churches, but no such thing as bad sex. “Good sex,” of course, means simply that at least one of the humans engaging in the interaction experienced some measure of fleeting enjoyment. A highly subjective and meaningless way of describing something—as G.K. Chesterton once noted, “The word ‘good’ has many meanings. For example, if a man were to shoot his grandmother at a range of five hundred yards, I should call him a good shot, but not necessarily a good man.”

Public nudity is accepted in many places in our culture (Amsterdam recently legalized sex in a famous public park), but any reference to God and the Moral Law are definitely not, as governing bodies consistently confuse freedom of religion with freedom from religion. Your prayers are not welcome in public, but your privates are. The Emperor has no clothes, but is quite enjoying it—so long as the chilly breezes of moral truth don’t leak out of drafty cathedrals to cause discomfort.

It is shocking to consider just how far today’s society has fallen in what is considered suitable for public consumption and what is not. It borders on the absurd—a public Christian prayer might offend a non-Christian, but a simulated orgy disguising itself as a “parade” surely will not offend anyone. (Many cities fund the Gay Pride Parade.) Surely some discussion of morality and what that entails should inform the discussion of what types of legislation should be enacted? All legislation, after all, reflects someone’s morality. This new morality, to paraphrase David Frum, believes it more honorable to fornicate in the mud of Woodstock than to fight in the mud of Guadalcanal. This new morality is one with dangerous consequences. As is proven by shattered corpses of aborted pre-born children brought about by millions of frivolous coital encounters, the Sexual Revolutionaries may not have found something they’re willing to die for.

But they have found something that they’re willing to kill for.