Ireland has fallen–and the battle is just beginning 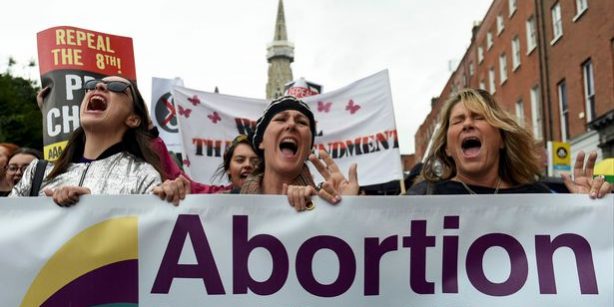 The Republic of Ireland has fallen. A coalition of the powerful–Irish politicians who ran on pro-life platforms a few short years ago before abruptly betraying their supporters, the international abortion industry, the media, much of academia, a gaggle of celebrities, and the European elites–have finally prevailed in their relentless efforts to persuade the Irish people to become the first to bring in abortion on demand by popular vote. They voted for abortion in wide margins, and many, if not most, did so with their eyes wide open. There was scarcely a lamppost in the country that did not feature a sign warning them that nearly all abortions would be perpetrated against healthy children, and that Ireland’s abortion regime would permit feticide up until six months, and that voting “Yes” would be granting the abortion industry a licence to kill.

I’m not going to pretend that this result is anything short of heartbreaking. I had the extraordinary privilege of working on the ground in Ireland for the last several weeks with the Save the 8th Campaign, working shoulder to shoulder with the selfless men and women who laboured tirelessly to persuade voters to protect the lives of their children. They worked to save the lives of other people’s babies, but today those who campaigned for the repeal of the right to life are rejoicing that their warnings went unheeded. On Facebook one Irish pro-life activist, Patrick Martin, posted something that sums up my feelings well: “Over this campaign I’ve met some of the most amazing and beautiful people Ireland has. People that I now call friends. I regret nothing…This isn’t the end, just the beginning of a new phase. Thousands of new pro-life activists have come through a baptism of fire and are ready to fight the government and every government to come.”

There will be many autopsies of pro-life Ireland forthcoming in the weeks ahead. Ireland had achieved something truly remarkable: A nation in which the laws protected every right to life equally, a country which the World Health Organization listed as one of the safest for a pregnant woman. The abortion activists abhorred Ireland’s shining example, a nation that illustrated so clearly that the idea of abortion as healthcare is an ugly lie. They showed that it is truly possible to love both women and their children, and the abortion activists could not forgive them that. This pro-life culture was a rebuke to their bloodthirstiness, and thus the combined powers of Hell raged against the weakest members of Irish society, and yesterday, at least for now, they prevailed. It is a sad irony that thousands who voted to repeal the 8th Amendment probably do not realize that they are only alive today because they were protected by law in the womb.

Much has been made of the so-called “generational divide” that pitted the older against the younger—young people voted in staggering margins to do away with the 8th Amendment. This illustrates a struggle that people of pro-life convictions across the Western world must recognize and must fight: We must pass on our values to our children. The lives of our grandchildren could very well depend on it, as many older Irish voters recognized. When one generation rejects the values of the one that preceded it, it speaks to a fundamental failure that must be addressed. A diet of pro-abortion media, entertainment, and relentlessly secular university education has poisoned young people around the world, and the Irish were no exception. Nothing is sacred to them anymore. The pro-life movement held out hope that perhaps the sanctity of the right to life would perhaps survive the destruction of the old order, but to no avail. It must be rebuilt.

The Save the 8th Campaign released a statement shortly after the exit polls indicated that a landslide victory was imminent for the Yes side:

The 8th amendment did not create a right to life for the unborn child—it merely acknowledged that such a right exists, has always exited, and will always exist. What Irish voters did yesterday is a tragedy of historic proportions. However, a wrong does not become right simply because a majority support it. We are so proud of all of those who stood with us in this campaign – our supporters, our donors, our families, and our loved ones. This campaign took a huge personal toll on all of us who were involved, and we have been so grateful for their support.

Abortion was wrong yesterday. It remains wrong today. The constitution has changed, but the facts have not.

This is true. I’ve seen dead, dismembered babies in dumpsters with my own eyes, and the thought of such things coming to Galway, and Cork, and Limerick—it is enough to make me weep. The dam protecting the weakest from carnage has broken, and now the work will be to reach those who voted to repeal the right to life while struggling to save each individual precious life. That work reminds me of a bit from The Catcher in the Rye, where one character is describing a recurring dream: “I’m standing on the edge of some crazy cliff. What I have to do, I have to catch everybody if they start to go over the cliff—I mean if they’re running and they don’t look where they’re going I have to come out from somewhere and catch them. That’s all I’d do all day. I’d just be the catcher in the rye and all.”

Irish babies now need Irish pro-lifers more than ever. This battle was the opening scene to a drama playing out across the West, where those who love life give their all to protect every tiny person that they can from those who intend them harm. Those who fought so hard to protect Ireland’s children, and those who voted “No” to repealing the right to life did not share in the shame that will cling to their nation for years to come. They are heroes, although they would refuse the label—as one told me, “It doesn’t take a hero to fight for babies. It just takes basic decency.” In today’s culture of death, that is no longer the case.

Earlier this week, as we were canvassing in Dublin outside the Post Office, I ducked inside for a moment. Hanging on the wall was a few lines from the Irish poet Seamus Heaney, and I thought that perhaps they can offer the Irish pro-life movement a little encouragement for their fights ahead:

On this side of the grave.

But then, once in a lifetime

Of justice can rise up,

And hope and history rhyme.