I’ve had a fascinating few days here in Vienna, Austria, after being invited to speak at the March for Life by ProLife Europe, a new organization that is setting up pro-life campus clubs across the continent. Those of you who read this blog regularly will remember that I met with the president of ProLife Europe, Manuela Steiner, in Salzburg earlier this year, and this week I had the opportunity to sit down with their whole team and talk through pro-life strategy, apologetics, recruitment, and outreach. They have an exceptional team and I’m looking forward to seeing this passionate movement grow and put boots on the ground on university campuses where abortion is almost never discussed.

The opening rally for the March for Life was being held in the Stephansplatz, so I headed down Mariahilferstrasse, the main avenue that cuts through Vienna’s trendy Sixth District. It is lined with gorgeous trees, and the green leaves were beginning to smolder with spots of yellow and gold, and here and there bunches had already burst into flame, stoked by the crisp autumn winds. American chain stores, Viennese coffee houses, and a mixture of fancy and fast food restaurants lined the strip, while elegant women with the pursed faces of people with things on their minds clopped past briskly and students covered the tables on the verandas with their papers and textbooks. The most obtrusive building was once an enormous World War II anti-aircraft tower that juts above the skyline like a sore thumb—it is now home to an aquarium.

One of the things I enjoy most about European cities is the statues scattered everywhere, some of them famous—like the increasingly green Goethe near a cluster of palaces in historic city centre—and many others forgotten to everyone but the most avid history buffs. I found the 17nth-century Holy Trinity Column near St. Stephen’s Cathedral, built to commemorate plague victims, particularly impressive. A massive and muscular club-wielding Hercules with pulsing pectorals and the slithering heads of a hydra entwining around his legs was carved on one of the entryways to the Hofburg Palace appeared almost alive, and various military figures atop their steeds (the courtyards still echo with the hoofbeats of Vienna’s famous horse-drawn cabs) are almost ubiquitous.

By noon, families were pouring into the square around the magnificent St. Stephen’s Cathedral, where a service was being held prior to the March for Life (an accompanying service was also being held at a nearby evangelical church.) I could faintly hear the shouting of protestors from around the corner, but dozens of Austrian police officers were maintaining a strict cordon between the opposing groups. When Vienna attempted to refuse pro-lifers the right to a March several years ago, the pro-lifers sued them and won. Now, police ringed nearly the entire March route, with one newspaper complaining that the entire city had been shut down and thrown into chaos.

I counted about 35 counter-protestors, a predictable mashup of the usual suspects. There was a rainbow banner, another declaring the group to be “Against Homophobia,” and some hand-scrawled signs expressing support for abortion. One showed an angry cartoon uterus shoving away a cross, and despite sporadic English chants of “My body! My choice!” they appeared to be a pretty unhappy group, especially as the square began to fill up with happy families pushing strollers and others of all ages. The March organizers were handing out hundreds of red balloons, and soon the sky over the 13nth century cathedral was dotted with drifting dots of red. When the bells in the church began to thunder, they drowned out the protestors entirely, and it seemed to be a fitting image.

By the time I followed several other speakers onto the stage just below the St. Stephen’s belltower, the crowd stretched all the way to the corners of the square, a sea of red balloons and smiling faces. Manuela translated my speech on the pro-life argument: Human beings have human rights, human rights begin when the human being begins, and science tells us when a new, unique human life begins. Thus, abortion is a violation of human rights, the cruel killing of the youngest and most vulnerable member of the human family. It is also a violation of everything natural: The mother’s maternal instinct, the father’s protective instinct, and the very humanity of the child who perishes. The crowd, of course, was in full agreement.

With chants of “Pro-life! Pro-life!” and accompanying cheers and roars of approval, the crowd—4,000 strong—left St. Stephens and began the march down the Ring Road surrounding the historic city centre. Passersby stopped to take pictures, and most of them peered at the signs with either interest or indifference. Only twice did anyone boo or shout in disagreement, and police officers keeping pace on either side of the boulevard were a reassuring presence. The protestors, who probably realized that not even the media would be able to favorably compare their crowd numbers, didn’t bother to protest the actual march.

We headed past the Opera House, through the Hofburg, the residence of the Habsburgs for 600 years, and wound our way to the final location, where more rousing speeches were delivered from a second stage that had already been set up. The organizers were thrilled—the March for Life here has only been going on for four years, and last year 2,500 had attended. This year, they were hoping for at least 3,000, but exceeded their own expectations with a crowd of 4,000 pro-lifers. It was incredibly encouraging for them to see so many people, many of them with their whole families, come out to show the country that thousands rejected the Culture of Death—and were willing to take that message to the streets of the capital. 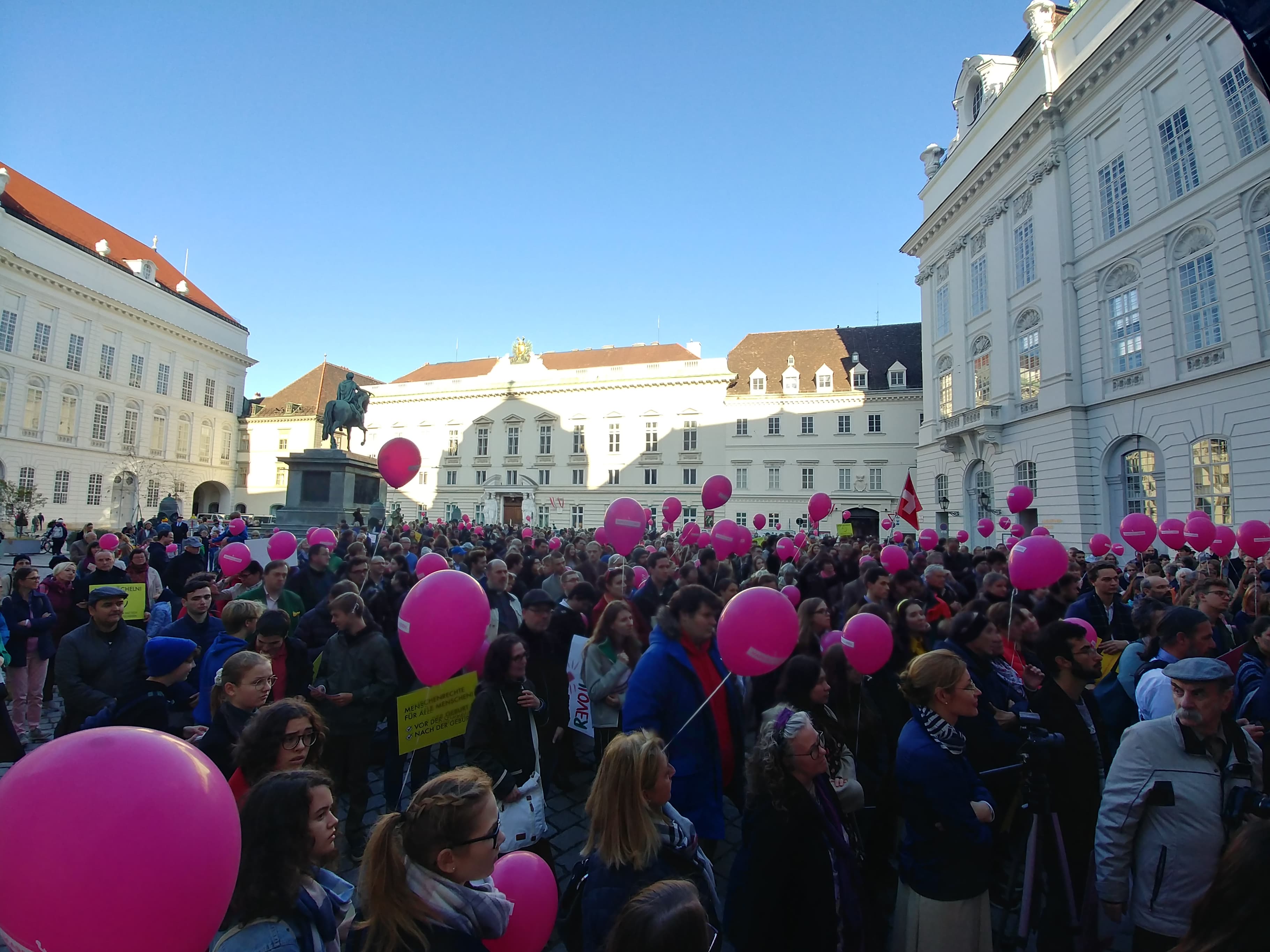 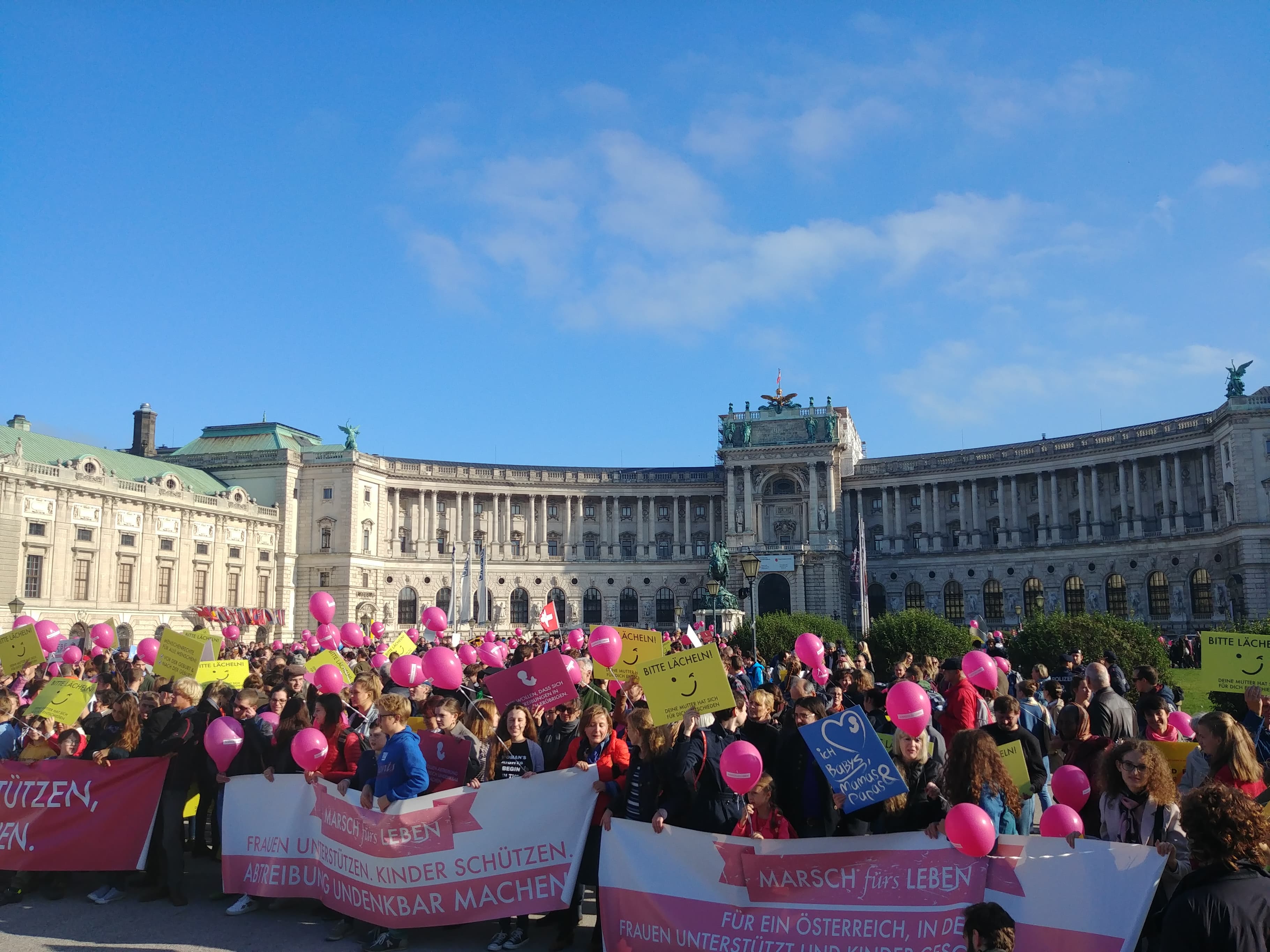 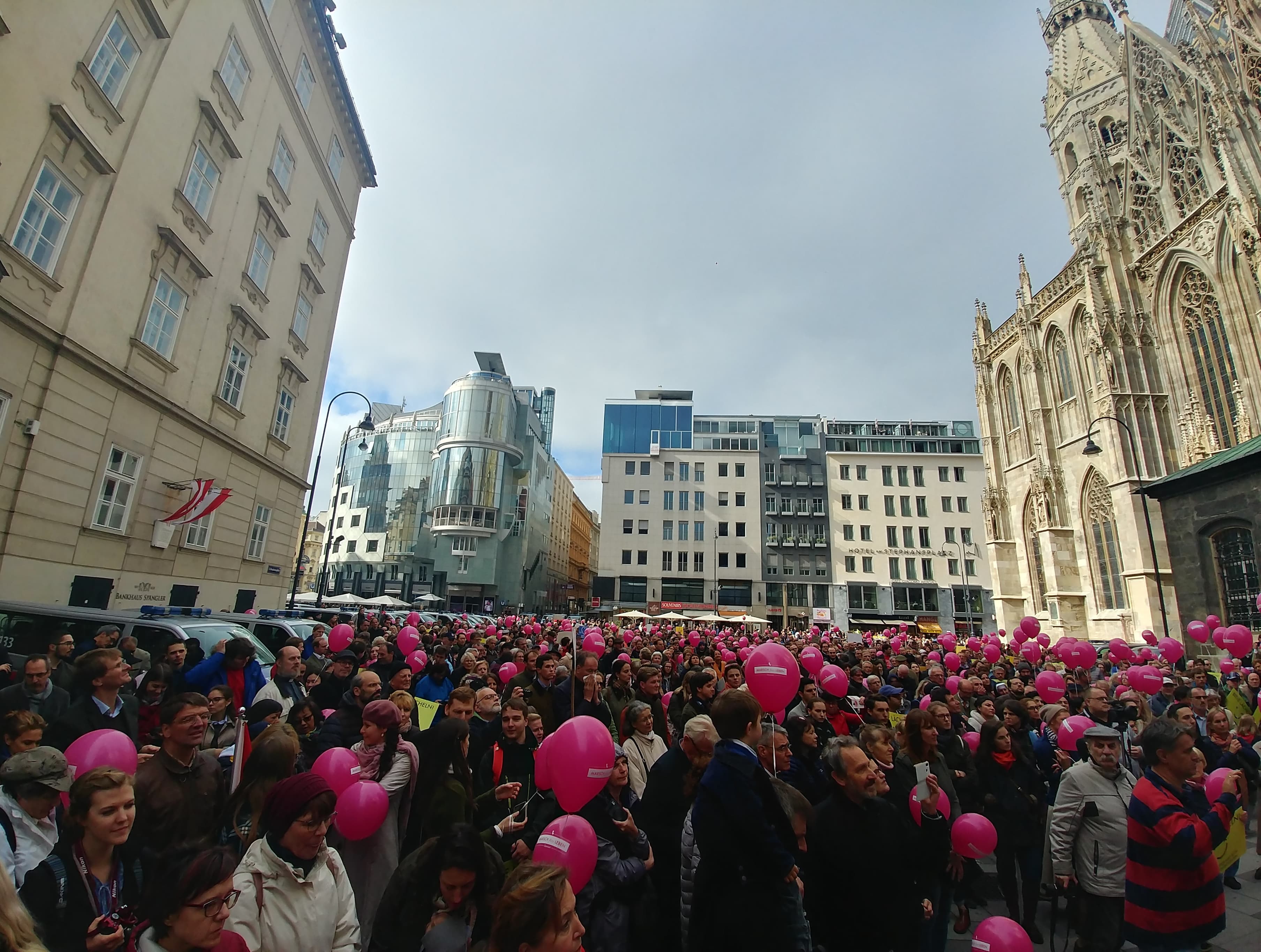 One thought on “Thousands march against abortion in Vienna”