There are a handful of events in the last few years that have indicated how essential abortion is to the progressive worldview – and why. Most recently, the death of Ruth Bader Ginsberg triggered an outpouring of grief and rage not because she had died – but because legal abortion might be threatened. But the reactions on the Left to the Texas Heartbeat Act have been particularly revealing.

He continued in another tweet: “Could be outliers in the whole developed world. There are already negative stereotypes of Americans in these states. One can imagine it getting much more extreme. What if they also ban genetic engineering and embryo selection, while other places go ahead?”

Hanania is president of the “Center for the Study of Partisanship and Ideology,” which “supports and funds research on how ideology and policy contribute to scientific and social progress.” 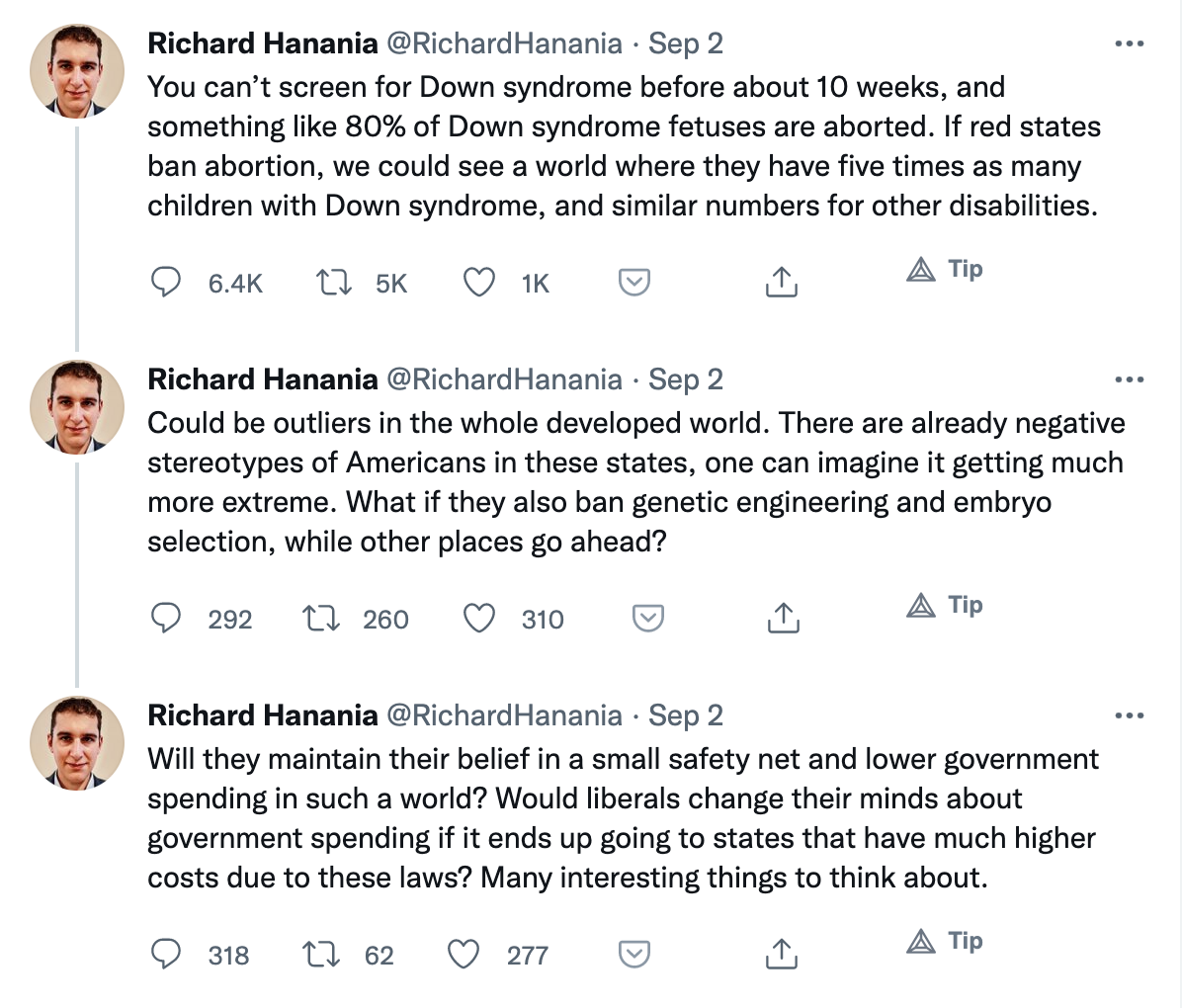 As pro-life ethicist Charles Camosy noted wryly, this is saying the “quiet part out loud.” Abortion activists talk about choice and autonomy, but Hanania reveals a key motive here: The ability to cull those children they consider “imperfect.” Disability activists should recognize that abortion activists fundamentally support their wholesale destruction through feticide.

Meanwhile, Joe Biden – the “second Catholic president” – is responding in a fury and has promised to do anything he possibly can to ensure women in Texas can procure abortions. CBS host Ed O’Keefe suggested that just as Dwight Eisenhower sent troops to Little Rock, Arkansas and John F. Kennedy sent federal marshals to deal with civil rights concerns, “why not send troops to help women if they’re trying to seek an abortion or transport them out of the state? Unclear if that’s on the table as something that could be considered.”

It isn’t clear what the Biden Administration can do, but he has already directed federal agencies to do whatever possible to “insulate women and providers” from the state law and take “what steps the federal government can take to ensure that women in Texas have access to safe and legal abortions as protected by Roe.” It isn’t clear yet what this is, but Biden will be throwing everything he can at Texas, and we should be prepared for the backlash.

Hillary Clinton invited her social media followers to join a call to strategize expanding the Supreme Court – clearly, Democrats are starting to become desperate. While we still do not know which way the justices will swing in the upcoming Dobbs case, their decision to let the Texas Heartbeat Act stand is certainly encouraging for pro-lifers. Biden’s review of the Supreme Court is due next month.

Not so for progressives. Late night host Bill Maher actually compared the plight of women in Afghanistan to Texas becoming more pro-life, posting a cartoon titled “The Last Flight out of Texas,” with women running down the tarmac and clinging to the landing gear the same way desperate Afghan refugees did last month. Afghans were willing to risk death for freedom; apparently, the ability to abort your own child is important enough to risk dying for, as well. The pro-abortion worldview really is a death cult in many ways.

But if Texas’s unique approach to pro-life law works, we may see other states follow suit. Governor Kristi Noem of South Dakota tweeted that “Following the Supreme Court’s decision to leave the pro-life TX law in place, I have directed the Unborn Child Advocate in my office to immediately review the new TX law and current South Dakota laws to make sure we have the strongest pro life laws on the books in SD.” It is also being reported that Florida lawmakers are “monitoring the impact” of abortion law in Texas. If Biden’s assault on Texas fails, we may see a pro-life revolution sweep the red states.