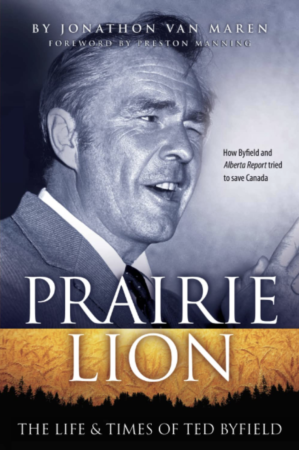 When Jonathon Van Maren set out to write the biography of Ted Byfield, he was amazed that one had not already been written. As the author notes, if Byfield had floated in the stream of fashionable opinion, he would have been showered with honours including the Order of Canada, but because he was a leading critic of the Sexual Revolution, Big Government, and the Laurentian Elite, his numerous accomplishments and influence on the Canadian media and political landscape have been belittled or ignored.

Prairie Lion benefits from not merely being an intellectual history that explores Byfield’s ideas or a Wikipedia entry of his numerous endeavours, but from the access Van Maren had to the Byfield family including many conversations with the subject himself to provide a complete picture of who Ted Byfield was. There are recollections of Byfield’s childhood in Toronto, entry into journalism, marriage and devotion to Virginia (Ginger), pivot to education including the opening of new Anglican schools, eventual return to journalism with the creation of the Alberta Report and its sister publications born out of publications began at his St. John’s schools in Edmonton and Calgary, and shift to publishing book series on the histories of Alberta and Christianity. Rather than a list of successes and (and some failures – Van Maren notes that it has been said of Byfield that he was a great entrepreneur but lousy businessman), we have a portrait of an actual person.

Van Maren writes that “Ted’s Christianity …was more than lip service” and manifested itself in more than his public positions on sexual morality or other political views. He and Ginger read the Bible and “sought to apply it to their lives in practical ways” including taking “drunks, jailbirds and other riffraff” who had nowhere to go into their home. Byfield told Van Maren, “You can’t read the New Testament and try to apply it without realizing that when God puts people like that in your path, you’re supposed to do something with it.”

Byfield was not only a believer in Christianity, although it suffused everything he did; he knew the value of a classical education and historical perspective, as well as physical fitness and outdoor adventure. He took long, regular walks; he took family and students for hikes and canoeing; he bought a small yacht with dreams of global adventures that ended after his early misadventure from Vancouver to eastern Canada by way of the Caribbean. These stories bring Byfield to life.

READ THE REST OF THIS VIEW AT THE INTERIM