The Democratic National Convention is an Abortion Infomercial 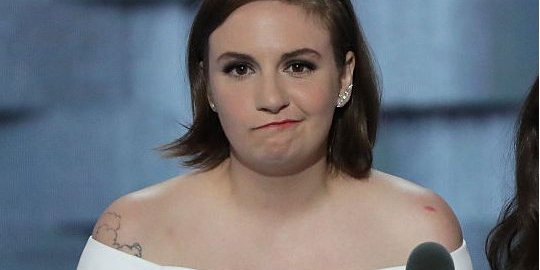 The Democrats are holding their convention this week in Philadelphia, the City of Kermit Gosnell. For a pro-life activist who is not a fan of Donald Trump, it feels like the Democrats staged the entire event specifically to assure pro-lifers that voting against Hillary Clinton is one of the most important pro-life things they can do in November.

The Democratic National Convention was basically an infomercial for abortion. Planned Parenthood CEO Cecile Richards, a woman with a distinctly evil presence, showed up to endorse Hillary as Big Abortion’s best friend. Just like Hillary was in charge of suppressing the women Bill Clinton’s campaign referred to as ” bimbo eruptions” in 1992, Richards is in charge of bloodily suppressing “baby eruptions” through her ghoulish organization Planned Parenthood. These two women have spent their lives enabling irresponsible and predatory men.

Lena Dunham, one of the crudest alleged comedians to disgrace the screen of a television, was also a speaker. She asked that people vote for Hillary because Hillary thought abortion was a human right, since apparently ending the life of another human can also be a human right. It’s worth noting that as Kevin D. Williamson has laid out in the National Review, Dunham sexually experimented with her sister and falsely accused a “campus Republican” of raping her. Between Dunham and Sarah Silverman, it’s like the DNC took a look at Trump’s record of crudeness and thought, “Hey, we can top that.”

And if you think Richards, Dunham, and Silverman were bad, the DNC was just getting warmed up. Stephanie Schriok, the head of radical abortion lobby group Emily’s List, showed up to stump for Hillary and decry Republicans: “They don’t respect women. They don’t trust women. They want to control women.” Uh, okay then. Speaking of respecting women, I wonder why Miz Schriok thinks women need the ability to kill their own offspring in order to be equal to men?

I think Hillary may have invited every single abortion pusher in DC, because Ilyse Hogue of of the National Abortion Rights Action League Pro-Choice America took the stage, too. In what was probably the most nauseating moment thus far, she announced that she’d had an abortion—and the crowd cheered and applauded. Yeah, you read that right. People actually cheered and applauded the violent death of Hogue’s pre-born son or daughter. Cheered. And applauded. How does the line go again? So this is how liberty dies—to thunderous applause.

Bill Clinton’s speech was pretty lacklustre, and I was actually surprised. His speech in defence of Barack Obama at the 2012 convention was magnificent, but his speech attempting to convince people that Hillary is, in fact, a human being was kind of a flop. First of all, there was the elephant in the room—everyone knows that the Clinton marriage is an arrangement of convenience. They haven’t lived together in fifteen years. Hillary was Bill’s hatchet-woman during his career, working to silence the never-ending lineup of women coming forward to talk about how Bill’s affairs and advances and in one horrifying case, his sexual assault. He humiliated her by allowing his libido to nearly destroy all they’d worked for by messing around with White House intern Monica Lewinsky. And upon leaving the White House, he promptly resumed his infidelities and began jetting around with Jeffrey “Pedophile Island” Epstein.  These facts are all well-established and fairly well-known. So when Bill attempted an ode to his wife, only those who are weirdly invested in the House of Clinton actually believed him.

So I suppose it should be no surprise that the Clintons would have Big Abortion as their number one supporter at the DNC. Hillary promised free abortions for all, the most radically pro-abortion policies in the history of the Democratic Party. Her running mate, Tim Kaine, flip-flopped about a bit and then supported her on it. In 1972, Republicans mocked the Democrats as the party of “acid, amnesty, and abortion.” In 2016, that’s what Hillary calls a winning strategy.

According to the Canadian Forces, pro-lifers are “right-wing extremists”
January 23, 2020