The Guardian has published what I actually found to be a rather horrifying set of pictures in which armed police officers approach a sunbathing Muslim woman wearing a “burkini” on a beach in Nice, France. She is wearing a tunic, leggings, and a headscarf. They then appear to force her to take off some of her clothing. The police issue her a ticket, which says she is being fined for not wearing “an outfit respecting good morals and secularism.” The “burkini” has been banned in 15 French towns so far, with authorities citing concerns about terrorism. The link between the burkini and bombs has yet to be established. 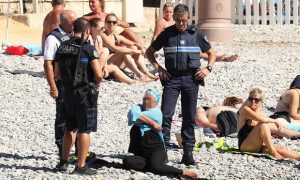 This is clearly crazy, paranoid, and offensively creepy. The idea that terrorism is going to be averted by forcing Muslim mothers sunbathing on the beach to take off articles of their clothing is delusional. I can’t imagine a more offensive image for any family members of said women than seeing armed men forcing them to disrobe in the name of “good morals,” or any better way to convince such people that secularism is simply the enforcing of decadent behavior. I myself would be absolutely furious to find out that gun-toting government employees had forced any of the women I know to expose more of themselves than they were comfortable with against their will. That isn’t freedom, it’s fascistic.

That doesn’t even address the fact that it isn’t just Muslim women who prefer to err on the side of modesty when it comes to clothing choice. Many orthodox Christians feel equally uncomfortable with the bare-all approach that our secular culture apparently thinks constitutes “good morals” and “secularism.” It’s ironic to think that when French fashion designer Louis Reard invented the bikini, he had to hire a stripper to present it for him because he could not find a professional model willing to wear it. The French have come a long way since then: now such exhibitionist attire seems to be mandatory.

Phil Lawler summed up the situation well: “There are, indeed, aspects of Islamic fundamentalism that are inimical to a free and open society. (The face-veil, for example, is dehumanizing.) The desire to wear a modest bathing costume is not one of them. It is revealing (yes, that’s the word) that in this weird response to a culture that shows no respect for women, secular France tells those same women to take off their clothes.”

The solution to Islamist barbarism is not Western decadence.