Mike Pence at the March to End American Carnage 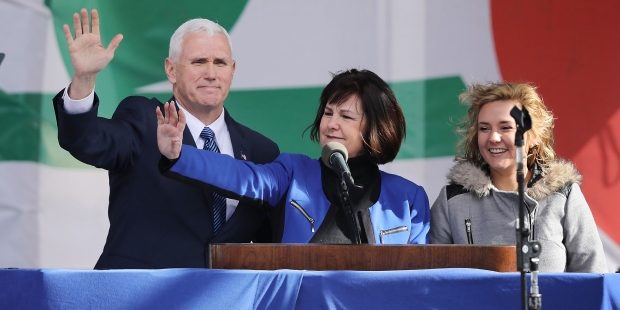 Bright and early this morning, I headed to the Washington Monument with my wife Charmaine, my colleague Nick, and thousands of other pro-lifers for the March for Life. After eight long years of the most pro-abortion president in American history, the pro-life movement finally has friends in high places again—and friends who appear willing to step up to the plate. President Donald Trump’s signing of the Mexico City Policy, which bans any group that facilitates or refers for abortions overseas from receiving any federal funding as well as recent moves to strengthen the Hyde Amendment to ensure that taxpayer dollars stayed out of abortionist coffers have created a sense of optimism. Perhaps this is only a beginning. Perhaps pro-lifers finally have another crack at defeating the abortion industry—and maybe even Roe v. Wade itself.

As we headed towards the rally grounds with the crowds, I couldn’t help but contrast the signs of the March for Life with the signs I’d seen at the Women’s March on Washington the week before. There were no signs with f-bombs on them this time. There were no crude sex cartoons. There were no weird animated women’s parts fingering the onlookers. There were no vagina costumes. Instead, there were thousands of happy men and women chanting things like, “We love babies!” and “Pro-life! Pro-life! Pro-life!” The contrast was stark and illustrative. One movement loves goodness, truth, and beauty. The other wallows in crudeness and loves abortion.

The lineups to enter the rally staging area were long, but for good reason: As the New York Times had reported yesterday, Vice President Mike Pence was planning to show up and address the March, after hosting pro-life leaders at the White House the night before. This was a truly historic occasion: While both Ronald Reagan and George W. Bush addressed the March by phone in years past, this would be the first time that a sitting Vice President joined the March in person. Police officers set up metal detectors at the entrance and patted us down as we walked in. Snipers could be seen on the rooftops, scanning the crowds. At one point, the excited marchers burst into a chant: “Pence! Pence! Pence!”

But first up was perhaps the most visible member of the administration besides Trump himself: Kellyanne Conway, the first female campaign manager to run a successful presidential campaign and now serving as Counselor to the President. The blond, elegant politico has been Trump’s cleverest surrogate, defending the candidate and now the president everywhere from Realtime with Bill Maher to The View, where she sweetly smiled and dismantled the arguments of the vultures surrounding her. Attempting to force Conway to answer a question she does not want to is virtually impossible, and watching TV hosts slowly implode into steaming frustration as she smiles, pivots, and brings the audience’s attention back to her preferred talking points has been fascinating to watch for someone who often interacts with a hostile media.

Conway, despite her impressive accomplishments, is not considered by those who participated in the Women’s March to be a legitimately credentialed woman because she, like most other women, is pro-life and refers to herself as “post-feminist.” Several left-wing news sites nearly melted down at her ingratitude when she dismissed the label of feminist in an interview with the Washington Post, replying that she preferred the label of “mommy” and astutely observing that, “I feel like the feminist movement has been hijacked by the pro-abortion movement.” The endless discussion recently over who qualifies as a “feminist” is another indication of how out-of-touch the media actually is: According to a 2013 poll commissioned by the (dismayed) Huffington Post and YouGov, only 23% of women consider themselves to be feminist. They might be able to pull off an impressive rally in the nation’s capital, but they’re still a very small minority.

Kellyanne Conway arrived on the stage in an elegant red dress to a wave of cheers and my wife’s declaration that she was “basically queen.” Conway’s speech was just what everyone wanted to hear. The right to life, she declared, is “not a privilege, it’s not a choice. It is God-given…This is a time of incredible promise for the pro-life, pro-adoption movement. We hear you. We see you. We respect you. And we look forward to working with you.” The marchers roared. They were looking forward to working with her, too.

“Science and medicine have joined religion and morality in causing many Americans to rethink how fragile and how triumphant this truly is,” she noted. “Look at a sonogram, meet a thriving toddler who was born at 24 weeks and who, with proper medical intervention, goes on to have a long and healthy life.” She promised that President Trump and Vice President Pence were on board with the pro-life movement. This seemed to be bolstered by a tweet of support sent out by the president—“The March for Life is so important…To all of you marching—you have my full support!”–as well as Trump’s pointed interrogation of a flabbergasted and speechless ABC News host as to why the media consistently ignored the March for Life, an annual event that topped 650,000 attendees in 2013.

This inquiry seemed to have the effect of forcing the media to cover the March this time around. I spotted news choppers whirring overhead. The National Post, CNN, C-Span, Slate.com, USA Today, NBC, and Fox News covered the March through the afternoon. I was elbowed aside several times by photographers and journalists trying to get close to the stage, one of them muttering to someone slow to move aside that, “I’m covering your event, don’t make this hard on me.” The Daily Beast ran two articles in a row, the first titled “Make no mistake, the anti-abortion movement now has serious political clout.” That clout, of course, is largely due to a man they cleverly dubbed the pro-life movement’s “homecoming king,” one of the first Congressmen to begin pushing for the defunding of Planned Parenthood, a steadfast governor who signed some of the strictest abortion laws in the country, and the current vice president of the United States, Mike Pence.

Mike Pence and his wife Karen received a roar of approval from the crowd when they emerged onstage, with Pence’s signature humble smile triggering a wave of goodwill. Pence is one of those men you instinctively trust, and has done plenty to earn the loyalty of the pro-life movement, too. After all, as he reminded the crowd, this was “not my first March.” Pro-life leaders wary about Trump’s commitment to the cause always refer back to Pence, the man who is undoubtedly “one of us” and “a true believer.” It is because Pence believed that Trump was a sincerely changed man after the release of the Billy Bush tapes that many others decided to give him the benefit of the doubt. His proximity to Trump is comforting for pro-lifers.

Pence began on a high note: “Life is winning again in America!” The cathartic cheers and screams were mingled with relief that Obama was finally gone, and joy that there was actually potential for a new era. And the fact that the Vice President himself was addressing the March in person—it was a deliberate act, and one that forced the media to recognize the legitimacy of the anti-abortion movement and the reality that this was their victory, too.

“This administration will work with the Congress,” Pence announced, “to end taxpayer funding of abortion and abortion providers and we will devote those resources to healthcare services for women across America. This week, President Donald Trump will announce a Supreme Court nominee who will uphold the God-given liberties enshrined in our constitution!”

His speech was beautiful, compassion-filled, and heart-felt. The marchers responded in kind. Even The Daily Beast noted the obvious affection for Pence: “Make no mistake: today’s was a Pence crowd, only excited about President Trump inasmuch as Vice President Pence was.” They summed up his speech in one sentence: “Planned Parenthood: Bye!”

A cluster of politicians soon emerged on stage to promise the pro-life movement immediate action against Planned Parenthood, with Mia Love, the first black female Congresswoman, giving an impassioned speech condemning the abortion industry’s war on “what could have been.” She described seeing a young African American teenager standing in the middle of the crowd at the Women’s March, holding a sign that simply read, “I survived Roe v. Wade.” Fifty-eight million others didn’t.

Comparisons to the Women’s March, of course, were inevitable. When the ever-hilarious author Eric Metaxas took the microphone, he announced that the March for Life made no exclusions—“as long as you’re human.” He announced that unlike Madonna, he did not want to blow anything up, even when he disagreed with people. He asked ABC—several times—if they were planning to cover the massive advances in science that are revealing ever more about the child in the womb, and if they were going to inform people about the barbarism being committed by the abortion industry. He ended by praying for his enemies—mentioning Madonna by name—to remind everyone about the one defining and fundamental difference between Planned Parenthood’s partisans and the pro-life movement.

I appreciated Benjamin Watson’s points as well—he is apparently a player for the Baltimore Ravens—when he highlighted the importance of men standing up for the vulnerable and the voiceless, and providing for their children, and protecting women. Men too often get a free pass in the abortion debate, since the feminists and abortion activists have been acting as human shields for irresponsible men for decades with convenient fictions about the irrelevance of fathers in the abortion discussion.

Overall, the mood at the historic 2017 March for Life was one of optimism and enthusiasm. The pro-life movement has an opportunity they have not seen in over ten years, and the Vice President himself showed up to encourage them to take advantage of it. On the other hand, it is essential that nobody take this opportunity for granted: As many of the politicians themselves urged, it is paramount that this opportunity not induce relaxation, but trigger an unparalleled push to strike a blow to Roe. If this opportunity is seized, perhaps there may end up being some truth to the dozens of signs that flapped about on the surface of the crowd today: “We are the generation that will abolish abortion.”