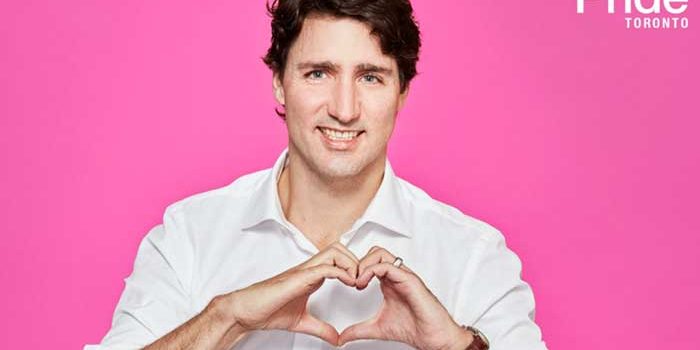 Warren Kinsella, the famous old guard Liberal political consultant, commentator, and author, published a blog post earlier today featuring a newspaper clipping from a British Columbian newspaper dated August 14, 2000. The editorial, written by someone Kinsella refers to as a “known” reporter who is apparently married with children and living out West, details an interesting incident starring none other than our prime minister, Justin Trudeau:

“I’m sorry. If I had known you were reporting for a national paper, I never would have been so forward.”

Those were the words that were spoken to an Advance reporter by Justin Trudeau, son of former prime minister Pierre Trudeau, August 4.

Trudeau, who was in Creston to celebrate the Kokanee Summit festival put on by the Columbia Brewery, apologized—a day late—for inappropriately “handling” the reporter while she was on assignment not only for the Advance, but also for the National Post and the Vancouver Sun.

“If I had known you were reporting for a national newspaper…”

Kinsella went on to note that this story has a lot to say about Justin Trudeau’s modus operandi, and wondered why Trudeau has never had to face the music for his past behavior:

Justin Trudeau “handled” a female reporter, and had apologized.  He wouldn’t have done it “if I had known you were reporting for a national paper.”  The newspaper editorialized about how he was wrong to have done what he did.

To those inside the Ottawa Bubble, stories of this type about Justin Trudeau are no surprise. The Canadian media’s resolute refusal (Patrick Brown being the notable exception) to cover stories of a personal nature are the only reason many politicians manage to maintain a squeaky clean image—although every once in awhile, someone almost gives the game away, like this memorable bit published by Global News after an interview with Trudeau’s wife:

Following the release of his memoir last fall, Trudeau was asked during a CBC interview about extramarital affairs, which he denied.

“Ask if whatever happened in our lives – I’m not saying it did or didn’t – as if we would answer that.”

She puts down her fork and looks across the table.

“I can tell you right away that no marriage is easy,” she says. “I’m almost kind of proud of the fact that we’ve had hardship, yes, because we want authenticity. We want truth. We want to grow closer as individuals through our lifetime and we’re both dreamers and we want to be together for as long as we can.

“I’m happy that we had to go through that.”

She left it there, but the fact that she cracked up in response to the news that her husband had claimed he’d never cheated on her to her is hardly a positive reflection on his character. The simple fact—and open secret in many circles—is that Justin Trudeau is not who he claims to be, regardless of the fact that he enjoys flying the feminist flag furiously at every opportunity.

Kinsella’s discovery of decade-old dirt isn’t particularly surprising, nor is the fact that Trudeau is a manifest hypocrite who constantly trumpets his support for women’s rights (recent Globe and Mail headline: Trudeau says gender equality will be top priority at G7 summit) while ignoring his own rather bulging closet. One day, perhaps, things will begin to catch up with him.