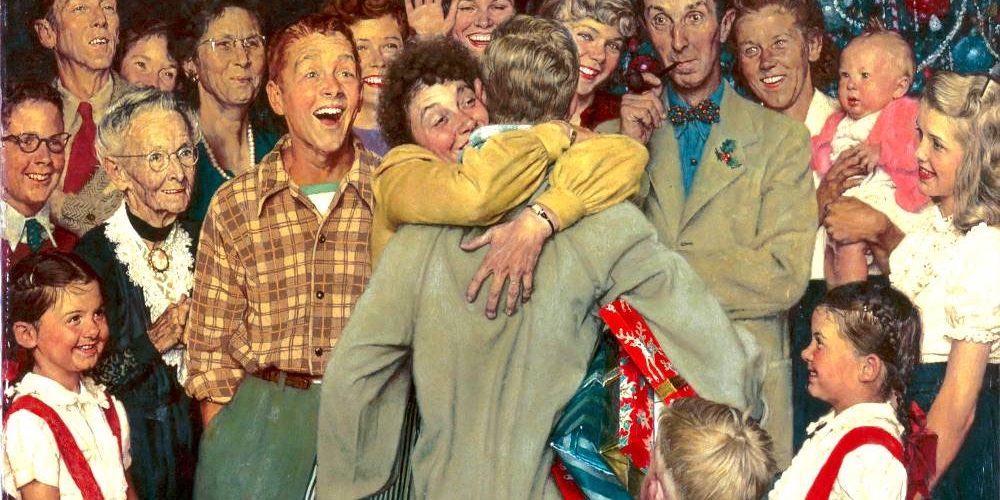 About a year ago, I wrote a personal essay explaining why my having come from a large family was such an effective deterrent to many of the current identitarian ideologies that have arisen from our poisoned politics of late. In short, I never needed to “find my tribe” or “discover my identity,” because I already had my tribe—well over a hundred cousins, and a couple of dozen aunts and uncles—and my identity was rooted in my family experience. The Van Maren side of my family has a habit of analyzing one another and then discussing which of our characteristics came from which grandparent, so there was never any doubt as to where, exactly, you came from.

I also got to know all four of my grandparents–three of whom are still alive today–and hear the sobering stories of what it was like to live under Nazi occupation. As I wrote then, the sorts of ugly resurrected ideologies that cropped up in Charlottesville last summer have no appeal when someone you love can still remember the bloodshed that accompanied them the last time around. At their root, these collectivist ideologies function the same way that gang membership does: They offer an opportunity to belong, as long as you are willing to do or go along with violence on behalf of your new tribe.

But I’ve grown to recognize that my experience is so rare that it is nearly incomprehensible to much of the modern generation. The first time I met someone with no cousins, we gaped at each other as I tried to imagine having no cousins while he tried to imagine having over a hundred of them. Neither of us had much luck. But things I took for granted—family barbeques so big we needed to rent a local school or rec hall, automatic and effortless friendships with boys and girls who looked and sounded just a bit like me, and having a sense of shared identity, of knowing who you were because you were one of them—most people did not have those experiences. And as a result, many people are being pulled to identity politics (and identitarianism), desperate to find a place where they can look around and think to themselves: This is where I belong. They are mine and I am theirs.

Earlier this week, I stumbled across a magnificent essay by Mary Eberstadt (I reviewed her most recent book It’s Dangerous to Believe when it was released) that articulates precisely what I had been driving at in my own column about family and identity. Identity politics, she writes, are a direct result of the Sexual Revolution:

How did this way of doing “politics,” which was only in its infancy 20 years ago, ever ascend to today’s heights? To study the timeline is to see that identity politics in America has grown exactly in tandem with the spread of the sexual revolution — and for good, if pitiful, reason. Western human beings today, like human beings everywhere, are desperate to know who they are, to whom they belong, where they have a place in the world. But today, the old ways of knowing all these desiderata — that is, by reference to the family and extended family — no longer exist for many people, and are growing weaker for many more.

Why is this happening? Because our organic connections to one another have been sundered as never before, outside wartime or natural catastrophe. Today’s clamor over identity — the authentic scream of so many for answers to questions about where they belong in the world — did not spring from nowhere. It is a squalling creature of our time, born of familial liquidation. Political identitarianism is a bastard child of the birth-control pill.

What a sobering thought—that the Sexual Revolution has accomplished a mass severing of relationships that previously only warfare or natural disaster could accomplish. To break people up into societal drifters—no extended family full of aunts, uncles, and cousins, immediate families broken up into his, hers and theirs with all of the accompanying confusions and jealousies—serves the State extraordinarily well. After all, the State can now play identity politics, too, with various “communities” being bestowed with political privileges and cultural acclaim, and nothing standing between the individual and the State. It is no wonder that the Soviet Union tried so hard to cleave apart the Russian families that responded to oppression and suffering by clinging to each other all the more fiercely.

But in the West, the revolutionaries have succeeded:

Whatever else it has wrought, the revolution has divided and scattered ineradicably familial beings — human beings — like no other force in our time…There’s a reason why “loneliness studies” are now the hottest academic stock in sociology. There’s a reason why “happiness studies” document over and over what most people could have asserted without embarrassment the day before yesterday — that people who live in families and practice religion tend to be happier and more productive than those who don’t.

Eberstadt is not exaggerating. Consider these statistics, taken from a recent survey of over 20,000 Americans over the age of 18 that revealed an epidemic of loneliness:

The destruction of the family has been a fabulously successful progressive project. The revolutionaries promised free love for all, but it turns out that it wasn’t free, it wasn’t love, and it wasn’t for all—the corpses of tens of millions of discarded children are a gruesome testimony to that. Everybody has the right to do whatever they wish these days, but happiness is vanishing in the face of selfish individualism because it turns out that pleasure and happiness are not the same thing. We hunt for new solutions to new problems, and look forward instead of back at what we abandoned and how it kept us from this place before. It reminds me of a poem from Arthur Hugh Clough:

“Old things need not be therefore true,”
O brother men, nor yet the new;
Ah! still awhile the old thought retain,
And yet consider it again!

The souls of now two thousand years
Have laid up here their toils and tears,
And all the earnings of their pain,–
Ah, yet consider it again!

We! what do we see? each a space
Of some few yards before his face;
Does that the whole wide plan explain?
Ah, yet consider it again!

The bankruptcy of Canadian conservatism (and how it got that way)
February 28, 2020

How the elites will take revenge on Middle America for electing Donald Trump
February 28, 2020