The vanishing villages and empty churches of Europe 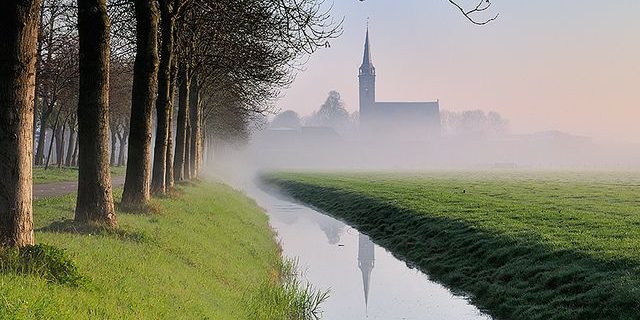 It has been twenty-two years since Dutch author Geert Mak’s An Island in Time was first published in the Netherlands. An ode to Jorwerd, the little Frisian village where he grew up, Mak writes movingly of the decline and collapse of village culture across Europe with lines rendered so tenderly I kept wondering, as I read, what turns of phrase were being lost in translation from the original Dutch. It is not so much a yearning for a culture that is past as it is a sadly nostalgic reflection on a world that is irrevocably gone. For example, there were 91,650 dairy farming businesses in the Netherlands in 1975. By 1995, there were only 38,938 left.

It was Mak’s chapter “How God Disappeared from Jorwerd” that I found most fascinating. He begins by describing his walk through the village to the little place he was renting while doing research for the book. “When I walked home the silence was overwhelming,” he remembered. “Even in the centre of Leeuwarden, where I had been a few days earlier, you heard the rain pattering in the gutter, and the sound of my footsteps rebounded off the stately gable roofs of the Great Church street. But here I was becoming accustomed to the silence, because it was a silence full of small sounds: the starlings around the church tower, the ducks in the field, a sheep, the geese that flew in a V-formation over the village. In Leeuwarden the silence had a nineteenth-century quality. Here, the silence was older.”

Once upon a time, Mak wrote, everyone had religion. In Jorwerd, there was the strict Dutch Reformed, the Catholics, and the socialists. But after the war, “God began to disappear.” As the old churchgoers died, their places in the pews stayed empty. Young people were moving away seeking opportunity, and newcomers seemed disinterested in church. The mechanization of agriculture contributed not only to the slow collapse of small farm culture, but also to declining faith. As the villagers began to feel that they had conquered nature, they also began to feel as if they no longer needed the God of nature. The church services—still held in many rural Dutch Reformed churches, even in North America—to pray for the crops and to thank God for the harvest began to peter out.

The spread of secular sentiment was universal, but it took the longest in the far-flung villages. “To a certain extent,” Mak writes, “this marked contrast between town and country was determined by the make-up of the population: families with a traditional lifestyle often preferred to remain in the country, whereas people looking for something different were keen to move into the towns.” Despite that, by the 1990s, Mak noted that there were only forty people in what had once been a thriving village church—and those people were an amalgamation of four former congregations collapsed into one. (By 2015, official stats from the government of the Netherlands would note that over half of the Dutch population claimed to have no religious beliefs whatsoever.)

“Fate seemed no longer to exist in the modern welfare state,” Mak writes. “Medical techniques and social security had provided people with the means by which death, disaster, and misfortune could be banished, controlled, or at least removed to the margins of existence.” So uncertainty—and reliance on God in times of trouble—could also be banished, with questions of Him only surfacing in uncomfortable moments. And to be disconnected from the beliefs that animated the generations of previous centuries was to be disconnected from the Netherlands as it was, and to lose the ability to understand how and why they lived their lives the way that they did.

It is strange, Mak notes, to take in a landscape so defined by Christianity with the realization that it is almost gone. Churches were once the centre of every village and every town. In a few places, they still are. The last time I was in the Netherlands, my cousin took me on a late-night walk through my maternal grandmother’s village, Nieuw-Beijerland. There was the dyke near the windmill where they sledded as children, the bakery where my great-grandfather had made his living (and hid several onder-duikers from the Germans), and in the centre of the village, a beautiful 17th century brick church where my great-great-Opa served as a deacon long ago, before he was laid to rest in a nearby graveyard. Some family members still attend a church nearby, and my cousin let us in and played the enormous pipe organ for awhile. Some of the Dutch have followed in the footsteps of their forefathers. Most have not.

Mak’s nostalgia for a more religious nation does not seem to be rooted in any particular belief, but rather a simple sense that something was lost when the lowlands abandoned the faith that had sent a thousand spires thrusting through the morning mists like fingers pointing heavenward. Even today, in a more godless age, the bells of the empty village churches still often ring out the years of the lives of departing men and women, although nobody bothers to ask where it is that they are going.

Perhaps nobody noticed the emptying of the churches because everything was changing, Mak muses. He writes about the dairy farms, and how technology and business and numbers have overtaken the once essential relationships between the farmer and the land and the animals and the weather, and that in each farmhouse where he stopped for a cup of piping hot coffee as he made his way around Jorwerd, the farmers talked about how they were sticking it out, but their children were leaving. “By the end of the evening,” Mak writes, “the talk would have turned once again to land, livestock, and open air. And the cowsheds were still redolent of the ancient smell of milk, mixed with hay and a whiff of dung, the sweet fragrance that is both timeless and of all times, and that can drive a person mad with nostalgia for something he has never known.”

Reading those lines, one wonders if he is still talking about the farms and the villages in which we all find our origins, somewhere back in the hazy past.