Here’s a roundup of analysis on Amy Coney Barett, the pro-life conservative nominated to the Supreme Court of the United States on Saturday by President Donald J. Trump. As I noted last week before she was nominated, Barrett has long been the pro-life movement’s top choice—the following selection illustrates other reasons why she is the right person for the job.

Politico has a fascinating article on Amy Coney Barrett’s new, family-oriented feminism and why it is the antithesis of the old, abortion-oriented RBG feminism:

But Ginsburg also viewed abortion rights as central to sexual equality, and her leadership helped give rise to a movement that remains laser focused on abortion to this day. Yet rather than make women more equal to men, constitutionalizing the right to abortion as the court did in Roe has relieved men of the mutual responsibilities that accompany sex, and so has upended the duties of care for dependent children that fathers ought equally to share.

Barrett embodies a new kind of feminism, a feminism that builds upon the praiseworthy antidiscrimination work of Ginsburg but then goes further. It insists not just on the equal rights of men and women, but also on their common responsibilities, particularly in the realm of family life. In this new feminism, sexual equality is found not in imitating men’s capacity to walk away from an unexpected pregnancy through abortion, but rather in asking men to meet women at a high standard of mutual responsibility, reciprocity and care.

Please do read the whole thing—it is truly fascinating.

First Things has published a wonderful piece by Laura Wolk, who is blind. She explains why she admires Coney Barrett, whom she met as a student at Notre Dame in 2013:

The assistive technology purchased by the university, which would have allowed me to compete on equal footing with my sighted peers, did not arrive on time. And, in keeping with Murphy’s law, my personal laptop immediately broke, leaving me overnight with no reliable way to access my texts, take notes, or otherwise keep pace in class. I needed help, and I needed it fast.

For that help, I turned to then-professor Barrett. Although I had known her for only two weeks, I felt confident that this poised, articulate woman would not dismiss my concerns and would counsel me on how to get the university to procure the needed assistive technology as quickly as possible.

But she did not merely help me to readjust the burden on my own shoulders; she took it from me and carried it herself. I will never forget the moment when she looked at me from across her desk and said, coolly and matter-of-factly, “Laura, this is not your problem anymore. It’s mine.”

Nicole Garnett, one of Barrett’s longtime friends, has a piece on her relationship with the judge in USA Today which ends thusly:

The Barrett home is a wellspring of hospitality. It is the kind of place where families gather to share life, where the kids are served hot dogs on a backyard picnic table while the parents are treated to Judge Barrett’s amazing crawfish etouffee. It is where she has prepared countless meals for families welcoming new babies or recovering from surgeries, comforted friends who know that they can always turn to her for support in times of crisis, and served as a sounding board for personal challenges both large (career advice) and small (potty-training advice).

Many commentators marvel that Barrett is able to do all that she does, and do it so well, while raising seven amazing kids. What’s her secret? Is she superhuman? Does she really get up at 5 a.m. to do CrossFit? (Yes.) But those of us who know her as a friend, and that is a long list, know the answers, because she models them for us every day in all she does. As her husband, Jesse, observed at her 7th Circuit investiture: “You can’t outwork Amy”; “you can’t out-friend Amy”; “you can’t out-love Amy.”

She reminded her readers that Barrett enjoys nearly universal acclaim amongst those who know her:

Yes, she is brilliant. And, yes, she is a principled, careful judge, admired legal scholar and amazing teacher. Her respect among her colleagues and students is reflected in the fact that she has been elected professor of the year three times by the law school’s graduating class and in letters of support for her nomination to the 7th Circuit, including ones signed by all of her full-time faculty colleagues at Notre Dame, all of her fellow Supreme Court clerks, hundreds of former students and dozens of prominent law professors from around the country.

Finally, as Kathryn Jean Lopez put it in National Review, the Barretts are simply a wholesome and inspirational American family:

What’s not to love? A woman of excellence. A testimony to marriage. A household of hospitality. A love of America and the Constitution. A tribute to Ruth Bader Ginsburg and recognition of her role in history. Putting a spotlight on the powerful friendship between Justices Scalia and Ginsburg…And, of course, there’s the radiance of the Dogma Living Loudly in such a beautiful way.

I have a particular love of the Barrett family because this is another potential Supreme Court family who have adopted. Of course, social media being what it is, people are wanting investigations into the histories of her two adopted children instead of taken the lesson that ought to be taken: We need that spirit of generosity that America has been known for. (Read Arthur Brooks, if you don’t know what I’m talking about.) The morning after Election Day, when I have no doubt we’ll have no idea the official results yet, the Supreme Court will be hearing a case on foster care, where the city of Philadelphia has halted contracts with Catholic Social Services because the beliefs of the Catholic Church on marriage are no longer acceptable there. That’s dangerous territory. That’s one of the reason Barrett was cheered at the White House today. She’s not looking to impose beautiful charismatic Christianity on the country. She wants that Constitution that’s protected us to be able to operate on our different beliefs to continue to operate.

P.S: Look at this photo of Barrett’s daughter looking up at with total adoration and admiration. Beautiful. 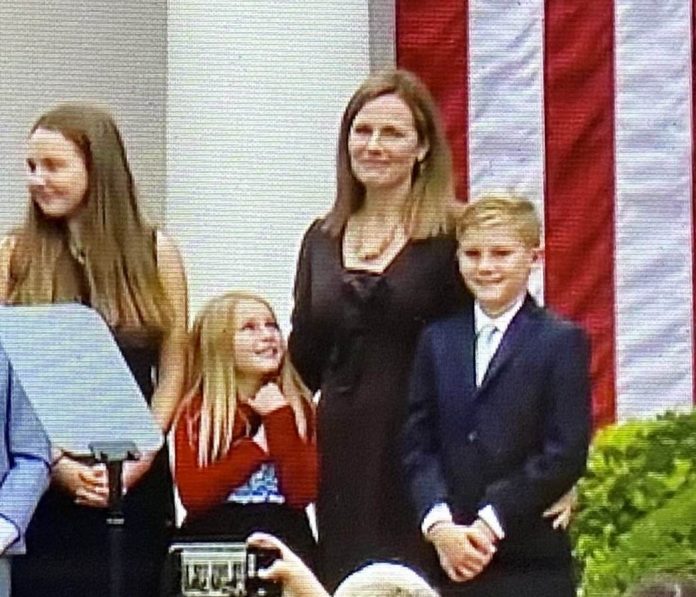