This article was first published in 2016

It was a couple years ago, at a conference of anti-abortion activists in California. I gave a speech on the history of social reform, on how those exposing the reality of abortion were following in the footsteps of the abolitionists, the National Child Labor Committee, and so many other activists who had fought to bring evidence of what was being inflicted on victims before the eyes of the public.

Later that weekend, one pro-life veteran pulled me aside and said he had something to show me. Something someone as young as me in the pro-life movement needed to see. I agreed, and we drove to his house in his truck. We pulled up at a detached garage, and went inside.

He’d been through a dumpster behind an abortion clinic, he told me. That in itself didn’t surprise me—that practice has been common in the American pro-life movement for decades. Joe Scheidler and Monica Miller recovered battered, abandoned children from the trash to bury them, and photographs of their corpses were some of the first abortion victim photography the movement put to use exposing the killing. Activists like Lynn Mills and Troy Newman have utilized dumpster diving to collect evidence of wrongdoing on the part of the abortion industry. When children become trash, Christians become trash-collectors.

But for some reason, I still didn’t expect the obvious. It’s one thing to see photos of abortion victims, or even horrifying videos—I’ve seen enough footage of abortion procedures to last several lifetimes. It’s an entirely different thing to look at a child in a jar. There’s something about it that doesn’t register—your eyes take in the sight, but your brain doesn’t quite understand what its looking at. After all, who has any mental context for a baby in a jar?

Yet that’s what I was looking at. A jar on the table, with a little boy in it.

The baby boy was perfect, so perfect. His skin was ivory white, but everything else looked so normal. His eyes were closed, and his expression was serene and peaceful. Just holding the jar felt strange, because the little boy would move about in the liquid, his arms and legs sort of waving morbidly. I almost expected him to wake up. The only sign that all was not well was two little puncture wounds in the back of his skull, where the abortionist had killed him.

I wondered how old he would be if he was alive. But he wasn’t. He was frozen in time. Trapped in formaldehyde. He was floating in a jar on a table, and I couldn’t take my eyes off of him. My stomach still twists, just thinking back. Babies in jars. Babies in dumpsters. Babies in incinerators. That’s our society now. The culture war is not some abstract philosophical duel fought by politicians seeking to carve up voting blocs. The culture war is a real war, with real bodies.

A photo I took with my cell phone: 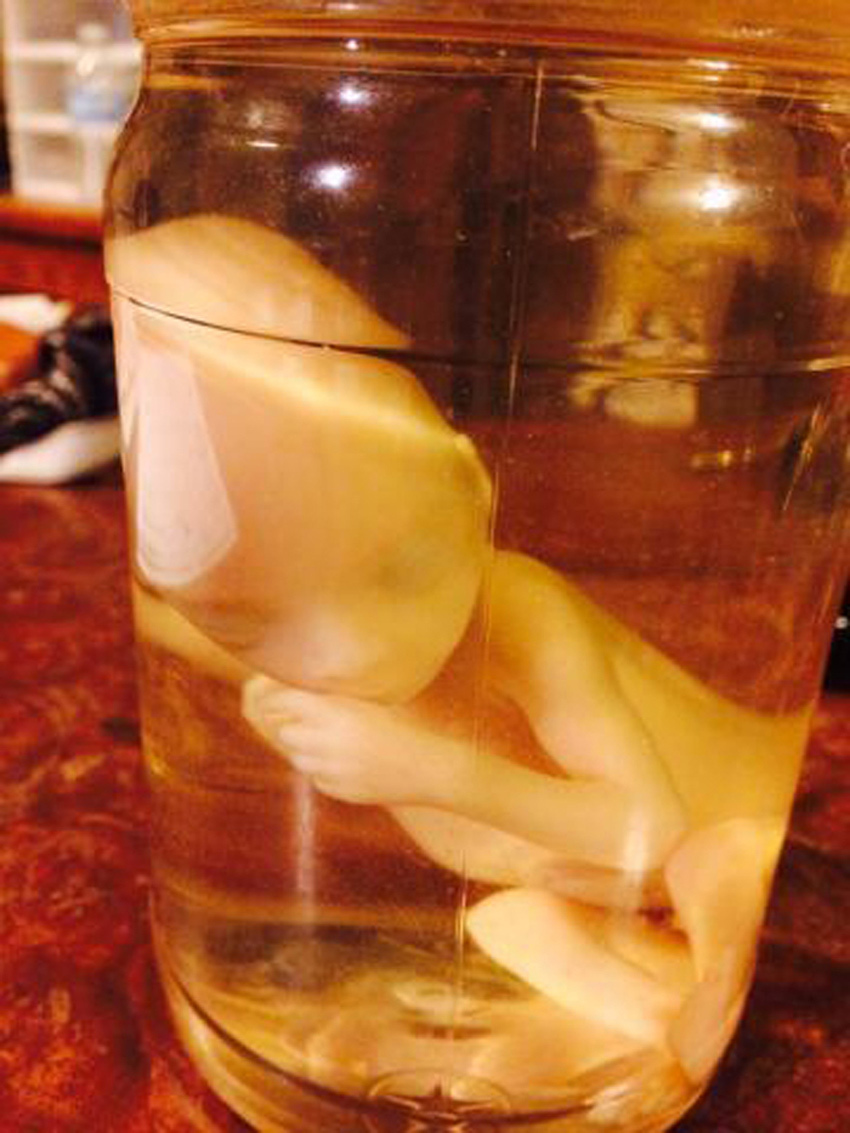 3 thoughts on “The baby in the jar”