First published on March 21, 2014 on The Times of Israel (Link: http://blogs.timesofisrael.com/on-schindlers-list/).

I noticed, just recently, that Leon Leyson died about a year ago at the age of 83. His name is not one that incurs automatic recognition, but his story certainly will: Leyson was the youngest survivor on Oskar Schindler’s famous list.

Some time before he passed away, I had the privilege of interviewing Leon Leyson while working free-lance for a Vancouver publication. Leon Leyson was only thirteen years old when he was transferred from the notorious Plaszow concentration camp to Oskar Schindler’s factory with his mother, father, and two siblings, although two of his older brothers perished. Leon Leyson described what it was like to know someone who truly knew what it meant to be a hero. Here are just a few of my favorite parts of that interview:

JVM: In short, how would you describe your experience?

JVM: What is your most vivid memory of Oskar Schindler?

LL: Oh, he was a different kind of human being. You have to remember that I experienced the other kind for the first two and a half years of the war and so when I met Oskar Schindler it was just like meeting a different kind of human being. Before that, I met these people who simply accepted the Nazi ideology and treated us as non-human, and I spent two and a half years in that situation and then I met Oskar Schindler, who seemed like a different person altogether. You could tell by the way he spoke to us, you could tell by the way he looked at us and how he treated us. And as everyone knows by now, he saved twelve hundred people during the war. It was a great accomplishment, and he did that at great risk to his own life and fortune. You know, nowadays it’s just about being a great CEO—this was a whole different thing, to treat us like human beings and do what he could to supply a little extra food and things like that. He was a—you know—you can’t describe it any other way than that he was a genuine hero. 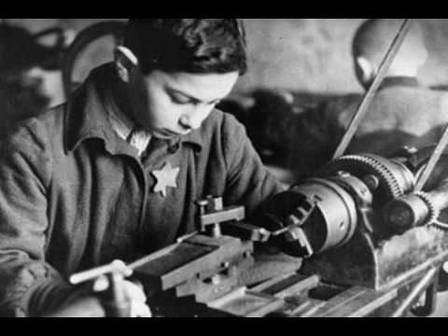 JVM: You met him many times?

LL: Oh, many times, many times. Once I started working there, I was transferred to his company, I met him almost nightly. He had a habit of entertaining a lot in his office and after the guests left he would come down to the factory floor and visit, just slowly walk through and stop and talk to people and just make human contact.

JVM: What did you think of the actual film?

LL: For the most part it was very accurate, you know, the events that occurred were accurate except that’s it’s still a movie, it’s not real life. But as far as the events are concerned, they were depicted accurately. The ghetto, the camp…you can’t show all the horrible atrocities that were committed on a daily basis; people being murdered…you know, you can’t show that in a movie. You can only show samples.

JVM: You feel that the story of Oskar Schindler is still very relevant to today?

LL: Oh, absolutely, absolutely, on so many different levels. I speak to middle-school students and high school students and to do the right thing does not need to constitute a Schindler. You can do the right thing by inviting a new student to come and sit at your table with the rest of your friends, or just one of those little things. It doesn’t take much. It’s a matter of being kind. When you talk to high school students, their social behaviour is all in the school, it depends on how they act, and it’s important that they know that it makes a difference, how you act and what you do.

JVM: What spurred you to speak out after so many years?

LL: Actually, what happened is the movie came out. When the movieSchindler’s List came out, there was a lot of interest generated in those events. I was persuaded to tell my experiences because I was on Schindler’s list, and little by little I continued speaking. Basically it was time. It had been forty years since I came to this country and I hadn’t told my experiences to anyone except my immediate family and even then I wouldn’t tell everything. So it was getting close to time to do it. If we’re going to honour the request of those people who died that if we survived to tell the world, then it was time for me to start.

JVM: When you hear the words “Never Again” and look around the world, what do you think?

LL: That’s why we need to talk all the more, to show what could happen, what occurred! People should have a lesson from this, how to behave, how to act towards each other. Apparently the lesson has not been learned yet. So we’ll just keep trying.

Words, I’m sure you’ll agree, to consider. For as Lewis Carroll once said so eloquently, “One of the deep secrets of life is that all that is really worth doing is what we do for others.”