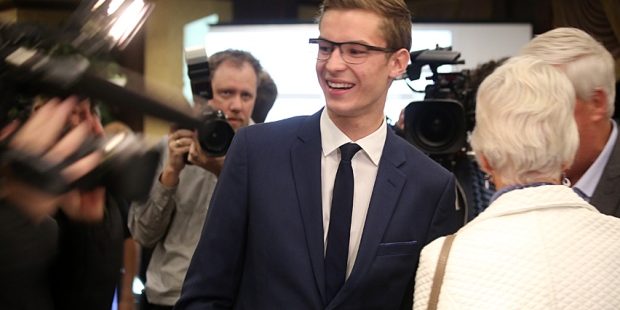 As most of you will know by now, 19-year-old Sam Oosterhoff became the youngest-ever Member of Provincial Parliament in Ontario’s history last night. An overnight political sensation, the media first noticed Oosterhoff when he beat Patrick Brown’s personal pick, Progressive Conservative Party leader Rick Dykstra, for the nomination, and immediately began circling like vultures. (Dykstra, of course, has a nasty habit of abandoning the principles he campaigns on the second he sniffs power. Hopefully he will not sniff it again for some time.)

Nearly every headline managed to include the phrase “social conservative,” presumably in order to terrify the peaceful, law-abiding citizens of Canada into bunkering down to prepare for the Return of the Knuckle-Draggers. Anonymous Tory insiders talked darkly about “the revenge of the so-cons,” and columnists and strategists alike complained that Oosterhoff’s trouncing of veteran politician Rick Dykstra signalled a backlash against Patrick Brown’s very public betrayal of the social conservatives he courted with vigor while securing the party leadership.

Of course, the truth of the matter is much simpler. As my friend Alissa Golob detailed in her column today, Oosterhoff was simply a good politician. He knocked on doors, he brought out voters, and as a result he got elected. That’s how politics works. But for many social progressives, this was too much to bear. Progressives complain incessantly about the “hatred” and “bigotry” and “narrow-mindedness” found in every social conservative. Most of them, of course, have never met one. Sandra Jansen, the former Alberta Progressive Conservative politician who just defected to her true home in the NDP today, claimed that social conservatives harassed her viciously at a recent convention in Red Deer. Those who were actually present tell me she is lying. Faking hate crimes—“cry-bullying,” as it is known—is a favorite tactic of the progressives.

The reason I bring this all up is because I have watched with distaste as a wave of vitriol has met Oosterhoff’s arrival in the public sphere. And I don’t mean disagreement with his stances on things, I mean vitriol. It began when he won the nomination, and it crescendoed last night. Dozens upon dozens of social media comments contained too much profanity for me to post here, many others fantasized about horrible things happening to him, and still others called him an array of sexual names and made all sorts of sexual insinuations.

Here’s just a few of the comments, out of hundreds, that I could actually post:

This is why I am pro-bullying. Weiners like this would never have the confidence to express their views if we shattered their spirit early on.

Don’t even have to click the article to know he’s likely a bible thumping conservative. The world doesn’t need any more of those.

This is one of the typical ones, but without the routine f-bombs and death wishes for social conservatives. Diversity and inclusion have their limits, folks.

Just look at him and try to resist the urge to punch his face … Hes just got one of those faces. I dont know him, i dont know anything about him, but i know his face makes me want to punch it.

Right. So respond with violence to those you disagree with.

I don’t say this often, but that is an infinitely punchable face.

Who the f**** voted for this turd? Pro life ??? Im pro him getting hit by a greyhound

Oh, here’s the death wish. Less profanity than most of them.

His face just looks so punchable

This, again, is one of the dozens of comments saying the same thing, but without the accompanying curses.

That, ladies and gentlemen, is a “progressive” response to a young person getting engaged in politics, and doing it well. Because Oosterhoff does not have same views as them—because he is, in their minds, a hateful, narrow-minded person—they wish that they could hit him, or that a Greyhound bus would do the job for them. Progressives are lying when they say they want young people engaged in politics. They only want young people who believe exactly what they believe. When young people who do not think precisely like them show up and threaten to make their political establishment a little more diverse, they instantly grow profane, apoplectic, and make wild accusations of a “takeover.”

Progressives like to say that social conservatives should be kept out of politics because they are hateful. But it turns out that when a young social conservative is successful at politics, we get to find out where the hate really comes from.