Late last year, a little book my colleague Blaise Alleyne and I had been working on for over a year was finally published: A comprehensive apologetic on assisted suicide and euthanasia, featuring arguments and debate tactics that anyone can use to engage their peers on these essential issues. Each of these arguments was first street-tested and used to change someone’s mind from pro-assisted suicide to anti-assisted suicide.

We embarked on this project when we realized during the political debate here in Canada on assisted suicide that most people did not know how to engage on this issue without using either explicitly religious arguments or appealing to the “slippery slope” consequences of legalization that other jurisdictions, like the Netherlands, have revealed to us. In order to make our case to an increasingly secular culture, we realized that we would need arguments that could resonate with anyone. We soon found that framing the issue around suicide—who gets prevention and who gets assistance?—was incredibly effective in persuading people to oppose assisted suicide.

Less than two months from publication, the reviews are coming in: 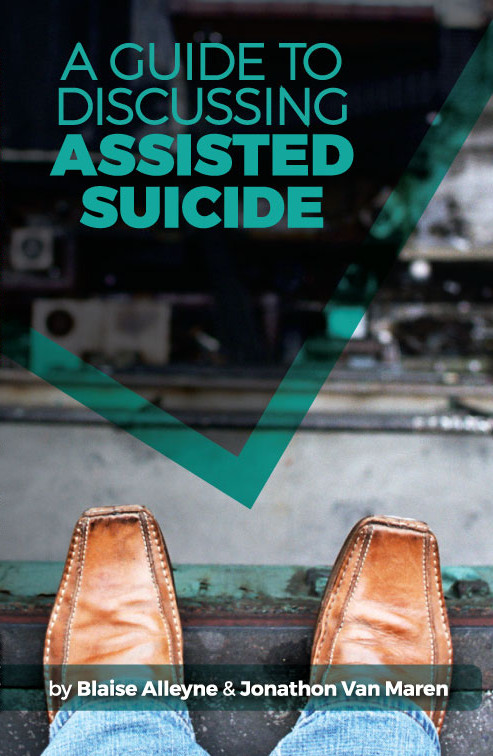 I just wanted to let you know that I’ve been using your approach to discussing assisted suicide when talking with my friends in medicine, and so far no one was able to find a counter-argument. They were speechless and would nod in agreement, although I know that they previously openly promoted euthanasia. Just wanted to thank you for helping make those discussions easier and more convincing!

When your neighbour expresses fashionable ideas approving euthanasia and assisted suicide, what can you add? Quite a lot of good sense, it seems–enough to raise serious doubts about the hard-wrong turn Canada has so recently taken. Read this Guide and get ready to be part of our journey out of a seductive nightmare.

Alleyne and Van Maren have simply, yet articulately, laid out the essential apologetics of the assisted suicide debate. A Guide to Discussing Assisted Suicide ought to be mandatory reading for all who find themselves on the front lines.

A Guide to Discussing Assisted Suicide is an excellent resource for those looking to debunk the common myths of “MAiD” presented by the media and euthanasia proponents. Blaise and Jonathon present simple, street-tested, and compelling arguments for why we should be pursuing suicide prevention for all, and assisted suicide for none. Their easy-to-read style is memorable and immediately applicable in almost any setting where end-of-life discussions take place. Anyone looking to defend life ethics and the inherent worth of humans will find the logical and historical coherence in the guide extremely helpful. It just makes sense. A must-have for medical professionals and regular folk alike.

We’ve worked very hard to make this book as simple and affordable as we can so that it ends up in the hands of as many people as possible. With suicide activists pushing for legalization across the Western world, it is essential that we equip ourselves to push back.