Note: I’ve wanted to go to Turkey for years, and the opportunity simply never came up. Then, last fall, I got an email from YYZ Deals, which sends alerts of cheap tickets to international destinations: $370 CDN to Ankara, roundtrip. For any of you who want to do international travel but find it too expensive, check this site out.

The drive to Istanbul is beautiful. The roadways are lined with greenery, scores of minarets poke insistently out of a sea of ramshackle apartment buildings like an Ottoman pin cushion, and the occasional garishly shiny Western business building of steel and glass stands out here and there like a sore thumb. As we get closer to the city, the apartments get nicer and the minarets get fewer and massive billboards featuring Turkey’s founder Mustafa Kemal Ataturk are omnipresent. There are only a few headscarves and a lot of excellent moustaches; most young people are on their smartphones, and everyone is smoking cigarettes.

Our first tour begins at the Hagia Sophia, the magnificent Byzantine cathedral first constructed in 537 by Emperor Justinian (the famous mosaics were largely added after 843 by Empress Zoe and her third husband Emperor Constantine IX Monomachos, who feature in one of the more famous renderings.) In 1453, Constantinople fell to the Ottomans, and Mehmet II ordered the Hagia Sophia to be renamed the Aya Sofya and transformed into a mosque, which is the reason for the four minarets and the enormous medallions inscribed with gilt Arabic letters hanging throughout the cavernous interior as well as the faces smashed off the mosaic angels who flit about the dome.

It can be argued—and this is generally held by those of an Orthodox persuasion, who have yet to forgive or forget these terrible events—that the fall of Constantinople can be traced back to the brutal sacking of the city in 1204 by the men of the Fourth Crusade, when age-old tensions between the Latins and the Byzantines finally exploded after decades of nasty politicking and a few assassinations. Diverting from their mission to free the sacred places of the Holy Land, the crusaders attacked Constantinople and ransacked the city for three bloody days, burning down thousands of houses, stealing anything that could be moved, and raping girls, mothers, and nuns. Villehardouin, a contemporary Latin historian, wrote almost sarcastically that “these defenders of Christ” let their lust run hot and wild as they bathed in the blood of their fellow Christians.

The crusaders were not simply satisfied with the loot they pillaged from the houses of the citizens and the palaces of the wealthy. Churches, too, were plundered, with the crusaders riding their horses right into the Hagia Sophia, fouling the floors until they were slick with blood and excrement. A hooker was placed on the patriarch’s throne to provide lewd dances, the altar and pulpit were dismembered and distributed, and the gems were prised off the reliquaries and other vessels to be taken home as souvenirs. The city remains scarred from the crusaders’ rampage: the Walled Obelisk standing nearby on what was once the Hippodrome (home to the fierce chariot races and resulting riots) is pocked and scarred from where the bronze plates featuring the victories of Emperor Basilius I the Macedonian (867-886) were chipped off by the crusaders, who mistook it for gold. The weakened Byzantine Empire never recovered from the carnage.

The Hagia Sophia is a breathtaking combination of soaring domed ceilings, enormous pillars, and ancient tombs. Inside, we stare at the impossibly high dome and the intricate mosaics, many of which are half-vandalized. The Muslims plastered them over as they transitioned the church into a mosque, and our Turkish tour guide makes it sound as if they were doing so in order to helpfully preserve them for the day when the place of worship was transformed into a museum by Ataturk in 1935. One of the Ottoman tombs from 1577, that of Selim II, is particularly morbid: It also contains the corpses of five of his sons, murdered on the same December night in 1574 to ensure an uncomplicated takeover by his eldest, Murat III. Later, 19 of Murat’s sons were also buried here after they were killed in January of 1595 to ensure the succession of Mehmet III. (After this last round of fratricidal killings, the policy was changed and royal siblings were instead confined to the Cage at Topkapi Palace, where they frequently went mad and were only occasionally murdered.)

Today there are no priests or imams, but there are many cats—one named Gli has an Instagram account with over 8,000 followers. On the second floor balconies, looking out the arched windows, I see that there are green parrots living in holes in the mortar of the vast walls, poking their heads out and peering at the delighted tourists suspiciously. Later, from the roof of my hotel, I can trace the path of the crusaders from the shoreline of the Strait of Bosphorus and through the narrow streets where they killed their way to the cathedral. There are only tankers and cargo ships in the Strait today. The church soars above the skyline, matched only by the minarets of the Blue Mosque, which deafens all those in earshot five times a day with the haunting call to prayer (which only a handful actually seem to heed.) I return, over and over again, to the edge of the terrace to stare at the church. If architecture is frozen music, then what a beautiful song it is.

From the church we walk past a smattering of crumbling Byzantine remains to the crowning jewel of the empire that replaced them. The Blue Mosque was the passion project of Sultan Ahmet I (1603-17), who is, of course, buried on the grounds. There is not as much to see here: Most of the inside is shrouded with plastic sheets for an ongoing restoration. Some of the beautiful tilework of blue and white is visible. It reminds me of the Delftware of the Dutch, and the Netherlands surfaces in our tour guide’s monologue as she points out the hundreds of tulips on the carpeted floor. Tulips were not originally native to the Low Countries: They were a gift from one of the sultans to the Dutch, who promptly perfected the cultivation of what was apparently the Prophet Mohammed’s favorite flower. The Turks now buy their tulips from the Netherlands.

Tulips also feature prominently in the famous Turkish carpets, which we discover when our guide takes us to a carpet shop to listen to an impressive sales pitch from a corpulent turtle-necked businessman who mistakenly believes us to be wealthy. As we sit on a wooden bench sipping a thimble-sized cup of Turkish coffee, which is approximately seventy percent caffeinated sludge, a goateed fellow named Cenk speaks intimately with us about our pressing need for a Turkish carpet, his tone as silky as the glimmering products that a number of scurrying employees unroll on the floor for our consideration. The rugs are reasonably priced, he tells us, and he ships anywhere in the world. But if we’re interested in real quality double-knotted silk carpets, then he has rugs that cost as much as a car. My wife points at one the end. “Fiat,” he replies. “But I’ve got a Lamborghini in the back if you want it.”

In the Grand Bazaar, a bewildering maze of 4,000 shops and winding narrow streets that resemble hazy passageways (smoking is forbidden but everyone is puffing anyways), we discover that the purchasing a single carpet is not the only way to go broke in less than an hour in Istanbul. There are hundreds of jewelry shops loaded with gold trinkets, and the antique shops are packed with gem-studded oddities. Even the bookshops feature Korans with covers made of solid silver. I ask one antique shop owner how much a tiny Orthodox icon costs. “Only two thousand,” he replies encouragingly. I don’t stick around long enough to discover whether he means Turkish lire or American dollars. Charmaine and I leave without purchasing anything, despite the vendors in the textile sector who descended on us like seagulls on a scrap of supper.

The Topkapi Palace, legendary court of the Ottoman Empire, is next. Situated between the Strait and the Hagia Sophia, Mehmet the Conqueror began building it in 1453, and the tour book informs us that this sprawling complex (including four courts, the infamous harem, and a treasury) was the home of “libidinous sultans, ambitious courtiers, beautiful concubines, and scheming eunuchs”—up to 4,000 people at its height. “Harem” was based on the Arabic word haram, which means “forbidden” under Islamic law: The sultans stashed girls purchased from slave markets across the empire in their gilded prisons, girls who were either kidnapped, captured during war, or sold by impoverished parents. They were attended to by castrated slaves to ensure that concubines with child could only have been impregnated by the sultan. Considering the number of intrigues surrounding the harem, I am surprised to discover it is a rather small building. The sultan’s throne room, too, is not what I expected, and his throne resembles a king-size bed with a screen around it.

These days it is packed with tourists who gape into rooms sealed from the world for centuries, from the circumcision room for the sons of the Sultan to the Pavilion of the Holy Mantle and Holy Relics, a series of chambers so sacred that even the sultan was only allowed to enter once a year, during Ramadan. Charmaine and I decide to wait in line with a crowd of Muslim pilgrims to see what the big deal is all about, and discover that the sultans had apparently stockpiled religious objects from all three major Abrahamic religions. The sword of King David, for example, as well as Abraham’s cooking pot, Joseph’s turban, and an astonishingly fresh-looking staff that once belonged (the display case assured us) to Moses himself. These items are obviously of dubious provenance, which does not seem to deter the enthusiasm of the pilgrims even slightly. Upon sustained questioning, the tour guide admits to me that there is a good chance that the staff didn’t belong to Moses, strictly speaking.

The more interesting relics were of those of the Islamic variety, as these had apparently been carefully tracked, traced, and cared for by Muslim leaders through the centuries until they came to reside safely in the private collection of the Ottoman sultans. There are some holy hairs from the moustaches of the Prophet Mohammed himself, which are mounted with great care and gazed at with such devotion for such a length of time by the visiting faithful that a security guard present for that purpose is constantly ushering people past with great irritation lest they pile up in front of the display cases. More wonders await further on, including the Prophet’s tooth, knocked out of his mouth at the Battle of Uhud on March 19 of 625, his sword and bow, the shirt of his daughter Fatima, and an assortment of other weapons belonging to his companions. Nearby, there is even the arm of John the Baptist in a bronze Byzantine reliquary. (A hole at the wrist of the casing proves that even if John’s arm isn’t in there, someone’s severed mummified arm certainly is.)

Charmaine and I leave the Palace to find dinner as the sun begins to set. We have walked through centuries today, and we are famished. 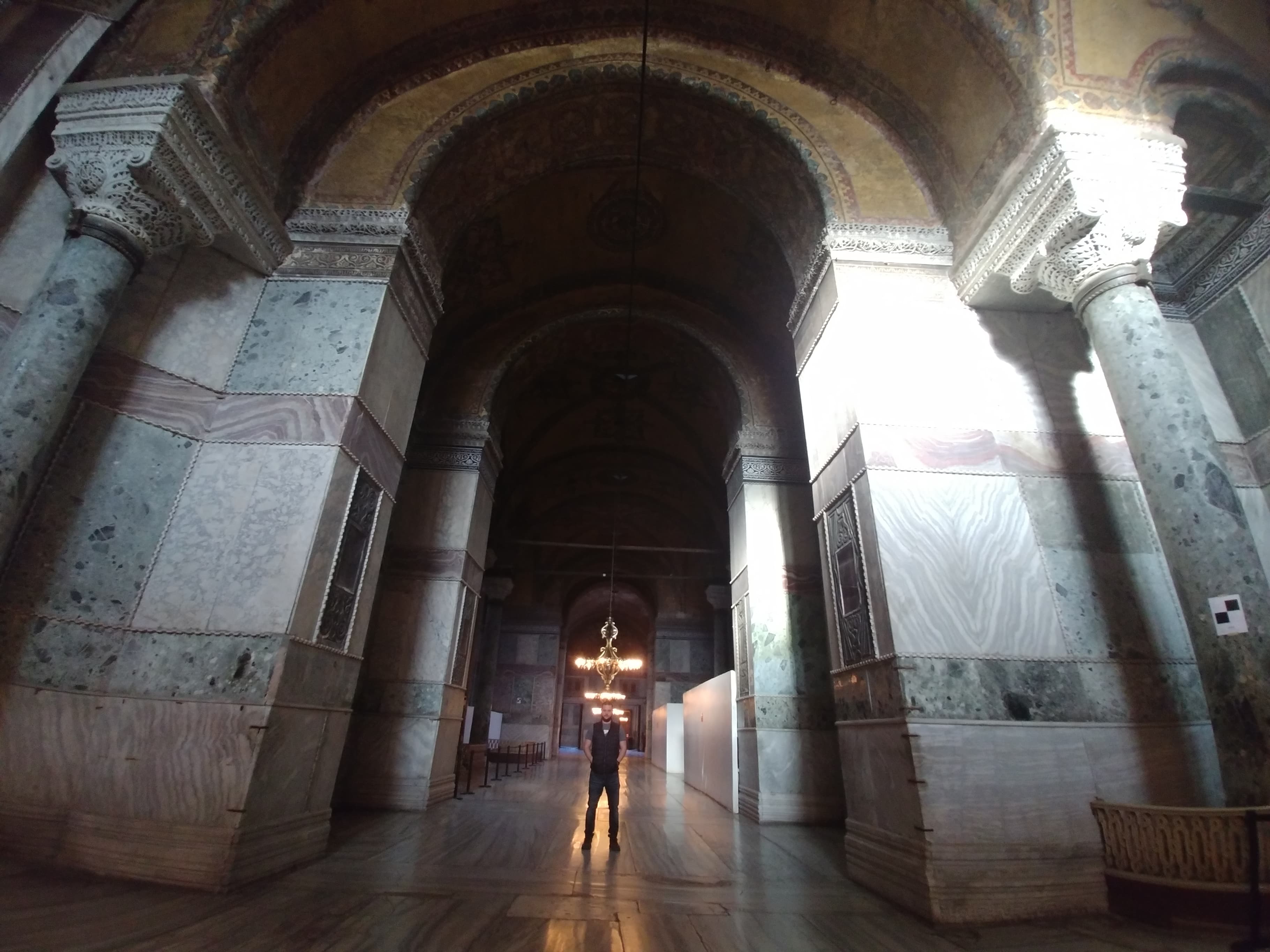 Prayer call from the Blue Mosque