The day the Canadians freed the Dutch 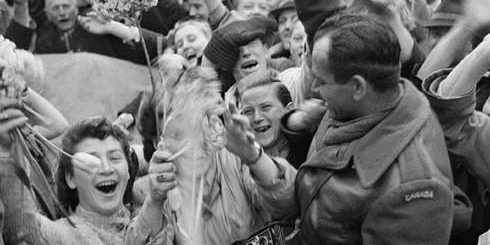 Just around the corner from the copy shop in Wageningen where I was printing my notes for a pro-life presentation last month, I spotted a plaque on the side of a red brick hotel with white and yellow striped awnings crouching over the windows. It was here at Hotel de Wereld on May 5 and 6 of 1945, as it turned out, that General Johannes Blaskowitz surrendered the 25th German Army to the Canadian general Charles Foulkes, with Prince Bernhard in attendance. Although Blaskowitz agreed to the terms of surrender proposed by Foulkes on May 5, nobody could find a typewriter in the entire town of Wageningen, and as a result the generals had to return the following day to type out and sign the surrender documents.

In the Netherlands, the formal end of the Second World War is celebrated with Liberation Day on May 5, which was recently proclaimed Dutch Heritage Day in Canada. The bond between Canada and the Netherlands was forged by the blood of the Canadian soldiers who fought and died to free the Dutch, and on Liberation Day the young men who sleep beneath the rows of crosses are solemnly remembered. Years ago when I was touring the Netherlands with a choir group, the elderly woman giving us a tour of Doorwerth Castle near Arnhem asked us to sing the Canadian anthem for her. As we did, her face lit up and tears began streaming down her face. The last time she had heard that anthem sung, it turned out, the Canadian soldiers had been liberating her village from the Germans.

Remembered, too, are those who died in the Nazi bombing of Rotterdam (which both of my grandmothers witnessed), the murdered resistance workers and reprisal killings, and those who starved to death during the Hunger Winter. Walking with some friends through the dunes pocked with the bunkers and other remains of the Atlantic Wall in Hoek van Holland recently, our host pointed out a white mansion as we exited a small forest. For years, he said, it was almost impossible to find a buyer for that house, because it was used by the Nazis—and many say that they horrifically tortured members of the Dutch Resistance there, tying them to chairs and kicking them down the stairs. In Canada, the War is confined to cenotaphs, museums, and the occasional monument. Here, history sleeps lightly.

I called my grandmother to ask what she remembered of Liberation Day in Nieuw-Beijerland, the little Dutch village where she grew up. She was eight years old, and she vividly recalled their neighbor knocking on their window. The family was shocked, she said, because it was after the German-enforced curfew, and nobody was allowed outside. Then, they heard the news: “We’re free! We’re free!” First, she remembered, the whole family got down on their knees to thank God for the long-awaited liberation. Then, her mother went upstairs to search for the orange banners and Dutch flag she had hidden there to hang out the windows. Everybody poured out onto the streets, laughing and singing and crying and saying, over and over with disbelief: We’re free! We’re free!

That Sunday, there was a special thanksgiving service at church. She also remembered the mayor, who had been forced into hiding and replaced by a Nazi collaborator, returning to the village, and the moment he stepped out of the carriage. More celebration ensued. The two young men who her father, a baker, had hidden from the Germans to prevent them from being deported as forced labor, went into the fish business and often returned to give the family free fish in gratitude for what they had done. Eventually, my grandmother recalled, the two “onderduikers” moved to Australia.

Sadly, there was also one tragic postscript. A few kilometres away from the village, a couple who had been heavily involved in the resistance hung a Dutch flag from the window of their windmill upon hearing of the liberation. A retreating German soldier shot at the flag–and killed the woman. They had survived the entire war despite the dangerous work they did, hiding fugitives from the occupying Germans. She was not the only Netherlander murdered by the wave of Germans flowing back toward their battered homeland. In the moment of celebration, the Nazis struck a final, vindictive blow. “We were already free,” my grandmother said sadly. “We were already free, and still she was killed.”

On Liberation Day, we remember the unsung and fallen heroes like the Dutch woman struck down in the very moment of longed-for victory. We remember the Canadian soldiers who fought and died to make that Liberation Day possible. And we thank God that thus far, these things live on in the memories of our grandparents, and not the lives of our children.