Pro-life politicians matter, and our leaders have the ability to send powerful messages. Consider this, from the official Nebraska government website from earlier this month:

Today, Governor Pete Ricketts issued a proclamation declaring January 22, 2020 as a Statewide Day of Prayer. January 22nd is the anniversary of Roe v. Wade, a U.S. Supreme Court decision which struck down Nebraska’s laws protecting unborn babies.  Governor Ricketts’ proclamation encourages Nebraskans to pray for an end to abortion and a deepening in respect for the humanity of unborn children.

“Nebraska state law states that it is ‘the will of the people of the State of Nebraska and the members of the Legislature to provide protection for the life of the unborn child whenever possible,’” reads Governor Ricketts’ proclamation.  “Nebraskans display our pro-life values in a multitude of ways from the crisis pregnancy centers that provide free care for expecting parents to the prayer vigils held across the state every year.”

The Governor’s proclamation encourages Nebraskans “to pray on their own or with others, according to their faith, for an end to abortion.”  Nebraskans are also encouraged to take direct action to aid mothers, fathers, and families in need, especially those expecting a child who cannot provide for themselves.

I’m grateful that in 2020 we still have leaders who urge us to repent for the children that have been brutally killed by abortion and call on us to pray for an end to the killing–despite the fact that Governor Ricketts was immediately barraged with all of the usual condemnations that usually accompany speaking up for pre-born children. 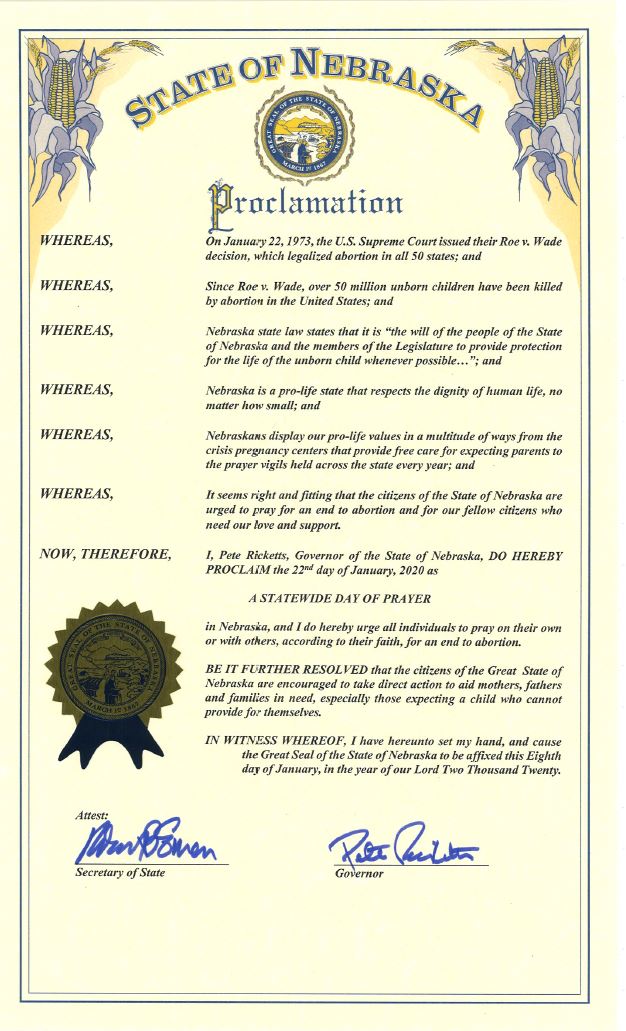