These days, you can self-identify as anything. For example, Joe Biden identifies as a Roman Catholic, despite the fact that he holds many views–on abortion and LGBT issues, for starters–that are incompatible with his alleged faith. Which is to say, he isn’t Catholic by any objective definition, and by Catholic standards has rendered himself inadmissible for Communion. The only reason he–and plenty of other Democrat politicians–still claim to be Catholic is because it is still an important cultural identifier and is helpful politically. Barack Obama wrote in his memoirs that when he realized he wouldn’t get far in Chicago if he didn’t go to church, he headed off in search of a church. An inspiring faith journey, I’m sure you’ll agree. But that’s why the same Democrats who claim anyone holding to Christian orthodoxy is a hateful bigot still demand that we accept their religious self-identification. It allows them to play their favorite game: “Of course Christians can be pro-abortion–look, we have a pro-abortion Christian right over here! Are you saying he isn’t Christian? How dare you!”

It is well-known that the progressive Democrats despise orthodox Christianity, and most of them make little attempt to hide it. Consider this response to The Atlantic’s Shadi Hamid on Twitter, who rightfully pointed out that a Christian holding to a Christian position is, by definition not news. The young woman responding to him (who has since protected her tweets) is a graduate of Mount Holyoke (2017) and is Joe Biden’s deputy data director for Pennsylvania: 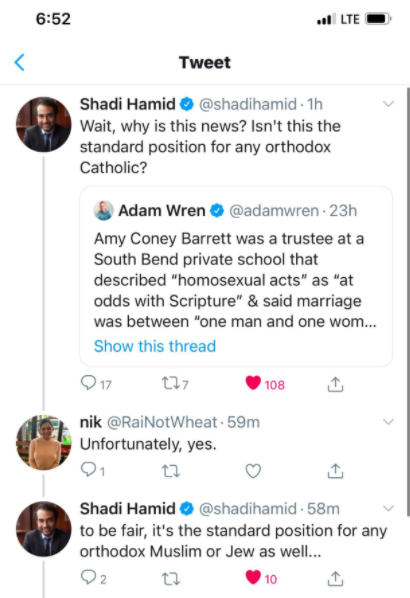 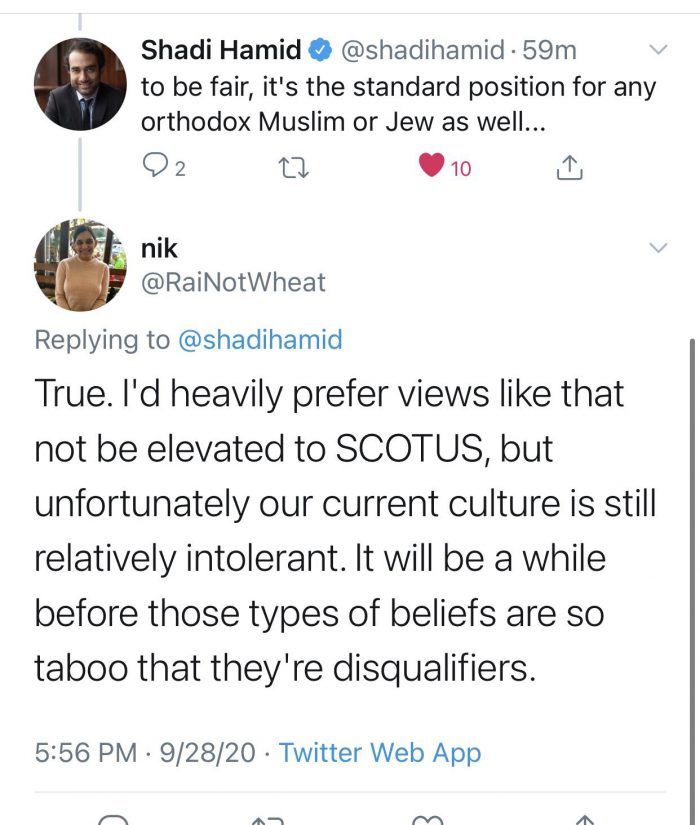 I’d bet a lot of money that this point of view is mainstream amongst Biden staffers. They believe that the fundamental beliefs of orthodox Christianity, Islam, and Judaism on sexuality should be considered “disqualifiers” for the Supreme Court and, presumably, from public office altogether. And why not? They openly state that those who disagree with them on the LGBT agenda are bigots and haters, despite the fact that no nation on earth permitted same-sex marriage prior to 2000. These people want to run America, and they have a very different idea of what America is like than the Founders did.

Now, why would people like that be working to elect Joe Biden if Joe Biden is a Catholic? I think we all know the answer to that.