By now, many of you have probably seen the viral video of a pizzeria owner in Toronto, Jennifer Bundock, screaming loudly at a group of pro-life activists (my colleagues at the Canadian Centre for Bio-Ethical Reform as well as several volunteers) who are peacefully engaging members of the public in discussion about abortion. Shrieking at the top of her voice, Bundock repeatedly swore at the pro-lifers, asked them a string of questions without permitting them to respond, and then told them that she didn’t care what they thought when they attempted to politely answer her questions. It quickly became clear that her questions were rhetorical. Many pro-choice viewers apparently found this tactic to be “heroic” nonetheless.

The video has now been viewed over a million times, and the reaction of many abortion activists to a woman shrieking swear words at young people on a public sidewalk is quite illustrative. First, those who laud Ms. Bundock as a “hero” indicate clearly that they see absolutely no value in discussion or the honest exchange of views. In their minds, opposing points of view or messages that they find distasteful are best met with a temper tantrum and a series of f-bombs. It is also interesting to note that the very people who claim that abortion victim photography could be disturbing to children have no issue whatsoever with a woman screaming swear words on a busy, public sidewalk. Their outrage, as we knew all along, is extremely selective.

When I first saw the video, my reaction was simply to be proud of our team. On the pro-choice side, you see an expletive-laden meltdown. On the pro-life side, you see polite young men and women calmly de-escalating the situation and refusing to respond to Ms. Bundock in kind. When it became clear that she was hysterical, they moved across the street. She was extremely rude to them, which she found justified because she does not approve of public pro-life activism. They were nothing but courteous to her, despite her appalling behavior. Some abortion supporters watching the video even commented, rather uncomfortably, at how professionally the pro-lifers responded to these verbal assaults.

The profound hypocrisy of abortion activists is once again on display as a result of this incident. As I have noted before, pro-lifers are constantly accused of harassment, even though these claims are false (one abortion activist recently got charged for assaulting herself and trying to frame pro-lifers.) As the video clearly highlights, it is in fact pro-lifers who are subject, sometimes on a daily basis and in all forms of activism, to both verbal abuse and physical assault—incidents which are typically ignored in the press, because they run contrary to the narrative that abortion activists would like to promote. Can you imagine what the public reaction would be if it was a pro-life activist screaming in precisely the same way at several abortion activists? If that happened, at least, pro-lifers like myself would condemn it outright.

Joyce Arthur of the Abortion Rights Coalition of Canada, who was thrilled by Ms. Bundock’s reaction, has even engaged in victim-blaming, claiming that those pro-life activists who are physically assaulted by pro-choice people bring the violence upon themselves. Many found this video to be the record of a heroic pro-choice woman chasing the big bad pro-lifers away. What it actually highlighted was the reality of what it is often like to be a pro-life activist. Pro-life activists not only face profane verbal abuse like this regularly, but that abuse is then supported by abortion activists like Joyce Arthur, who will justify virtually any behavior as long as it is directed at those she disagrees with.

So next time you hear some nonsense from the victim-blaming Joyce Arthur, or any of Canada’s other abortion activists, about pro-choice people being harassed, remember that they are lying. Remember that they actually support verbal abuse, as long as it is directed at people who disagree with them on abortion. And remember that there are pro-life activists out on Canadian streets every single day, and that those activists face hysterical, swearing rants with professionalism and politeness, just as they should. Despite these people, they see lives saved and minds changed every single day.

This is what the Canadian pro-life movement looks like. These are the people willing to face verbal harassment and even physical assault to stand up for pre-born children in the womb. And I could not be more proud of them: 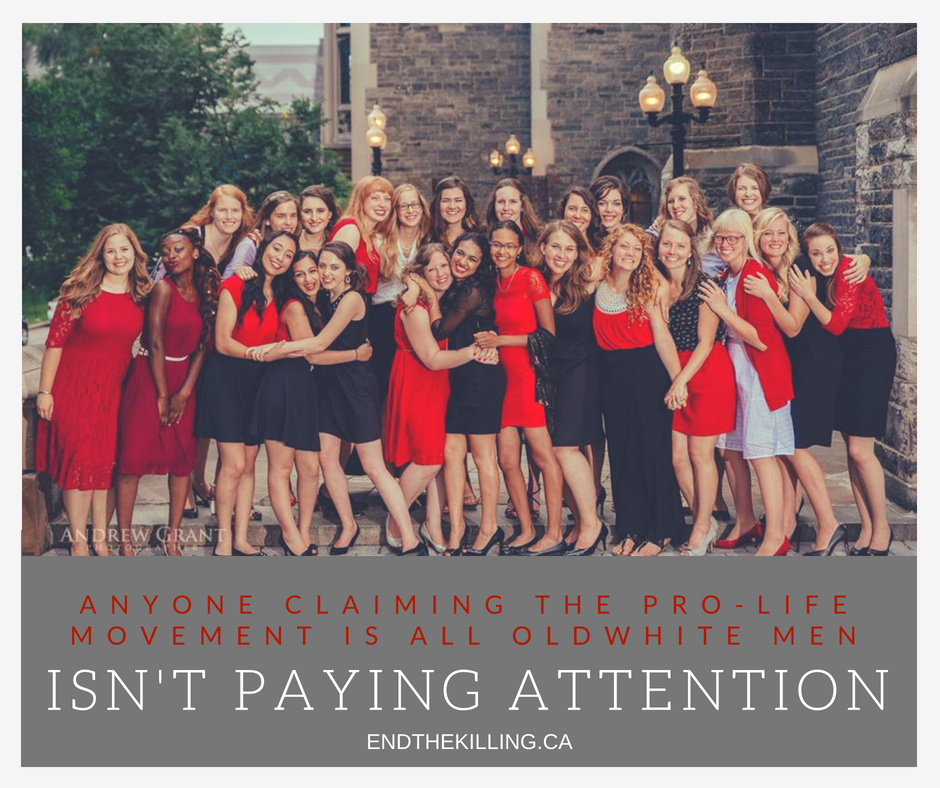