For months now, the world has been transfixed by the stunning images streaming out of Hong Kong. There are photographs showing endless masses of people packing the streets, lit up by the omni-present cellphone screens glowing in the darkness, videos of masked young men pulling down facial recognition towers and flashing laser pointers at the police to foil this Orwellian technology, and footage of protestors slamming smoking tear gas canisters into thermoses of mud to neutralize them. The protests have now been going on without pause since March, and on June 9 as many as a million people marched through the streets—as much as one-seventh of Hong Kong’s population.

To summarize the situation for those who haven’t been following these events, Hong Kong is a former British colony that was handed over to the People’s Republic of China in 1997 under a deal that would grant this “special administrative state” a “high degree of autonomy” until at least 2047. This policy was known as “one country, two systems,” and Hong Kong maintained its own judicial, legislative, and executive powers that operate independently of China’s pseudo-Communist system. Earlier this year, however, the government of Hong Kong attempted to pass an extradition bill that would theoretically permit China to ship dissidents and other Hong Kongers who have displeased the Communist government back to the mainland, where they could be imprisoned, tortured, or even executed. In response, Hong Kong erupted.

Hong Kong’s leader Carrie Lam attempted to alleviate concerns by offering concessions, but these were rejected and the protests continued. On June 12, protestors swamped the area near Hong Kong’s legislature to stop a debate intended to speed up the extradition law amendments and were confronted with rubber bullets and tear gas. Lam “indefinitely suspended” the legislation that would have amended the extradition law, but this pause proved unpersuasive to the protestors as well, who pointed out that she could swiftly table the bill again at any point and then promptly pass it. The mass movement escalated, and this time the protests swelled to an estimated two million people. On September 4, Lam withdrew the bill entirely. The movement, however, has now become about police violence, government accountability, and democracy itself—and despite this key victory, the weekly protests continue.

One key element of these protests that began to emerge throughout the summer was the presence of many Christians, including Christian leaders. One of the movement’s most outspoken leaders, Joshua Wong (who has already been imprisoned for his role in the protests once) has noted his Christian faith, and Rev. Chi Wai Wu, the general secretary of the Hong Kong Church Renewal Movement, told journalists that a prayer meeting outside the main government complex on June 11 ended with a sea of people singing the hymn, “Sing Hallelujah to the Lord.” Bishop Joseph Ha Chi-shing has stated that he will remain near the protestors in order to pray for them as the demonstrations continue, as the “shepherd should not just be with the sheep but also guide them,” warning the protestors that they are Christians first and that acting in accordance with their faith was essential.

On September 4, the day Carrie Lam withdrew the extradition bill, I spoke with Italian freelance journalist Alessandra Bocchi, who had just returned from the Hong Kong protests and interviewed a number of Christian leaders there. One of the key reasons that Christian Hong Kongers are so concerned, she said, is that China is currently engaged in an all-out crackdown on Christians, replete with arrest quotas for police, the demolishing and shuttering of churches, and mandating a revised, Communist-friendly version of the Bible. For months now, pastors have simply been vanishing and Chinese Christians have been dragged off to prison. If China gains the power to extradite dissenters, Christians fear, they could have Christians in Hong Kong picked up and shipped to Chinese prisons—and that eventually, they will face the same restrictions as Chinese Christians.

The protests, Bocchi told me, have become a truly extraordinary movement—millions of people, many with different but overlapping concerns, coming together in one of those moments that is obviously historical before it becomes history. It is in many ways more of a spontaneous combustion than a planned movement. “I was very surprised because I’ve seen various protests in the Western world and I’ve never witnessed people singing Christian hymns,” she told me. “In Hong Kong where Christians are a minority, where you don’t even expect to hear any hymns anywhere, you have them chanting, thousands of them chanting, together and holding hands. You see this collaboration with Christians, and they’re very active in their protest.” In Hong Kong, only 11.8% of the population are Christians.

When I asked her what stood out the most about the protestors she met, Bocchi said that it was their fearlessness. “They know how to deal with tear gas. They know how to deal with rubber bullets. I mean, they use the umbrella, for example, as a shield. I was hit by a rubber bullet on my arm when I was on the side of the protestors. So the police don’t really discriminate even though I was wearing a press vest, which is a yellow vest.” For many Christian Hong Kongers, this fearlessness is borne out of a genuine fear that China’s growing influence could result in their freedom to worship being curtailed, just as it has been for Chinese Christians on the mainland. For the moment, religious freedom is protected under Hong Kong’s Bill of Rights. But as 2047 looms closer, the spectre of Communist China casts longer shadows—and the Hong Kong protestors know that the battle they fight is for their future. They do not yet know if it will be free. 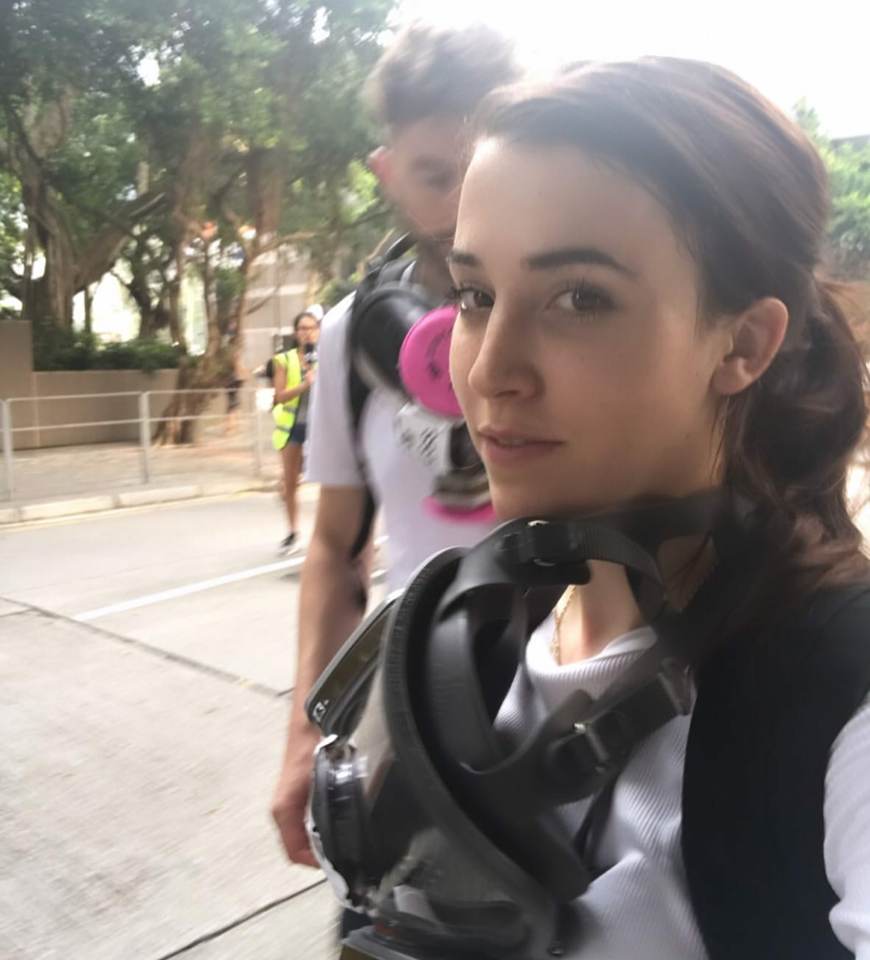 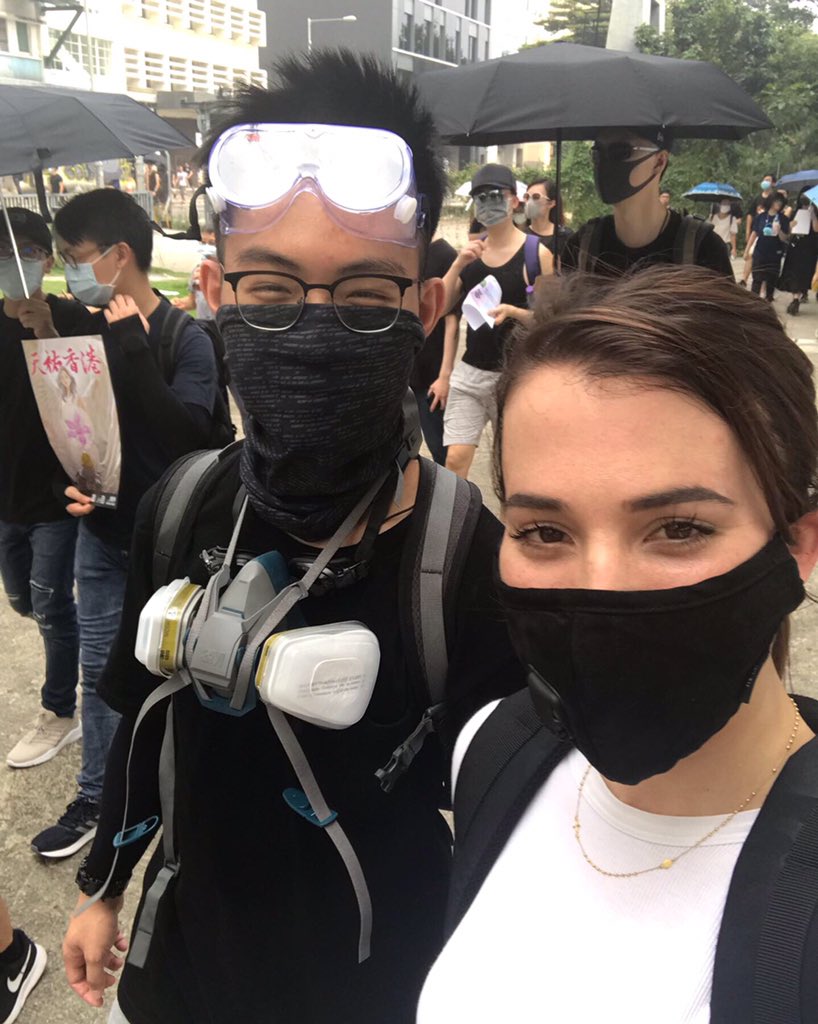 Listen to my interview with Alessandra Bocchi: