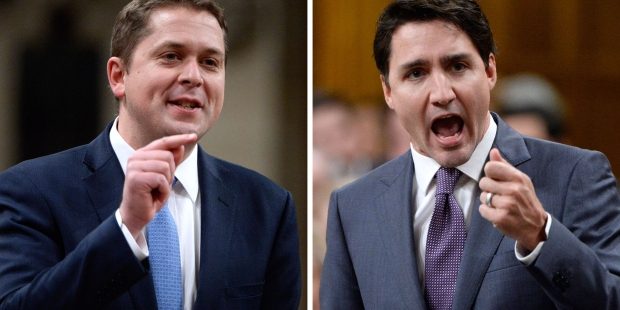 It’s voting day in Canada, and there is a lot on the line. The Liberals and the Conservatives are neck-in-neck, the NDP is a wild card, and the Green Party is predictably getting more coverage than they deserve, as per media tradition. It is one of the closest races in Canadian history, and if there’s one thing that all of the commentators seem to agree on, it’s that this has been one of the dumbest election cycles in recent memory, from the blackface pseudo-scandals to the nonstop mudslinging to the war room attempts to portray Andrew Scheer as some dark and evil Trumpian force.

Justin Trudeau made a stop in Brantford on Saturday, and I swung by the rally with my wife and my friend to check it out. It was a fairly large crowd—the police estimated that nearly 500 people showed up outside an Italian eatery—and a few angry protestors were making themselves heard, as well. Their signs were amusing but a tad over the top: Trudeau For Gitmo, Get Rid of the Crime Minister, and F*** Trudeau. Crowd pumpers tried to stir up chants of Four More Years! For More Years! but they petered out pretty quickly. One fellow tried to get people chanting We want hemp! but that didn’t take off, either. Shortly thereafter, the smell of weed began wafting through the crowd.

Trudeau was apparently supposed to give a speech, but only ended up speaking for about two minutes, hoarsely shouting about “choosing forward” and urging Brantford to vote for the Liberal candidate, Danielle Takacs. (The current Member of Parliament here is Phil McColeman, a solidly pro-life MP.) As a drone hovered overhead to capture any social media-worthy moments and supporters with red signs manoeuvred to block the shouting protestors, Trudeau pressed through the crowd, hugging and squeezing hands and taking selfies, and within minutes was hustled off by security again. On to the next stop.

It was a bit surreal, standing a few feet away from the prime minister (for obvious reasons, I had no desire to shake his hand), to contemplate just how much evil this man has brought to Canada in such a short amount of time. Hundreds of millions of our taxpayer dollars shipped overseas to fund abortions in the developing world. New pro-abortion and anti-free speech judges on our courts. Constant abortion advocacy in Canada and abroad—and Trudeau has promised to continue to push provinces like New Brunswick to increase abortion access if he is re-elected. The Liberals have also promised to ban so-called “conversion therapy,” making it illegal for those with unwanted sexual attractions to pursue the counselling they desire. Four years was bad enough. Eight years will give Trudeau the chance to irrecoverably transform this country.

Many pro-lifers have been disappointed in the Conservative Party this election cycle, especially as Andrew Scheer, the leader with the perfect pro-life voting record, gave consistently ambiguous responses to questions on social conservative issues for much of the campaign. That said—and readers of this blog will notice I have remained fairly silent on the election this time around—I genuinely believe that as of tomorrow, either Justin Trudeau or Andrew Scheer will be the prime minister. I may not be 100% sure what Andrew Scheer will do. I am 100% sure of what Justin Trudeau will do. That alone is enough for me to vote Conservative today.

I am still hopeful that many pro-life policies will be pursued under a Conservative government. Pro-life MPs, for example, came forward to re-emphasize that a Conservative government would not fund abortions overseas. But, as sad as it is to say, even if that does not happen, things can get so much worse under a Trudeau government that I am willing to vote for what Andrew Scheer will not do as much as what he will do. Some may call this defeatist. Based on what Trudeau has done in the past four years and what he has promised to do going it forward, I think this is simply realistic. The future of religious liberty, freedom of speech, and freedom of association may well hang in the balance, and I’m not going to throw my vote away in a gamble that a socially liberal libertarian like Maxime Bernier is the answer. He isn’t going to be prime minister. Scheer could be.

To put it bluntly, I plan to vote in self-defence of Christian communities for the only real option that we have who might be able to stop Justin Trudeau.

I’ll be hosting live election coverage with my friends Alissa Golob and Scott Hayward from Right Now tonight from 8 PM to 12 PM EST. We’ll be analyzing the election as results come in from a socially conservative perspective, with an incredible line-up of guests from Andrew Lawton to J.J. McCullough. If you want to tune in, we’ll be streaming live from the Facebook pages of Right Now and the Canadian Centre for Bio-Ethical Reform.